A courtyard with a concrete pool sits at the centre of a house on Phillip Island in Australia, designed by Branch Studio Architects and illuminated by large skylights.

The site of the home, called Casa X, sits only a short distance from the beach and sea, views of which are blocked a tall run of trees.

Other homes next door have an open relationship to their sites without walls or fences, and the residents wanted to balance this with a greater sense of privacy.

This was achieved through the use of a courtyard typology.

"The formal vernacular of the local context is highly conservative," explained the practice. "Most houses in the area do not have perimeter fences, particularly those with direct connection to the foreshore and beach."

"As a result the design of the house within its site and wider surrounds has been designed to become is own 'compound' or 'fence' of sorts, without the need of creating a secondary perimeter." 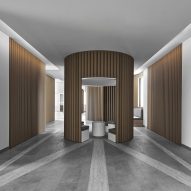 This U-shaped arrangement sits atop a base of wooden decking, which is raised due to flood risk in the area.

At the centre of the deck is a pool sunk into a concrete plinth.

In order to maximise privacy, the exterior walls of Casa X have been left blank, doubling as the home's boundary.

Light enters through both the windows overlooking the courtyard, as well as through a series of north-facing skylights.

"Three 'pop-up' high level windows or light-catchers allow northern light to penetrate deep into the house throughout the day," said

"The progressive height of each of the three pop-ups builds an external, hierarchical language to the streetscape given the importance of each space within."

The arrangement of these lights creates a play of light and dark responding to the intimacy of each space.

Light suffuses the kitchen, while the living space is a darker place to retreat to.

In the master bedroom wing, this arrangement is based on the resident's daily routine.

Bedrooms are located at the northernmost end, the dressing room and bathroom at its centre and a study connecting to the living room.

Pale wood has been used to finish the interior floors, walls and ceilings, which slope down to help pull light down into the spaces.

A library space sitting off the main living area sits slightly lower down and is finished with black, bookshelf-lined walls, illuminated by a thin horizontal slit below the ceiling.

In the bathrooms, a material palette of raw grey concrete floors and a horizontal band of hand-made tiles wrapping around the room.

The roof of each bedroom pavilion has been angled to prevent too much direct sunlight entering the courtyard.

Based in Melbourne, Branch Studio Architects was founded by Brad Wray and Nicholas Russo. Other recent residential projects by the firm include a house extension built using rammed-earth walls.