The three Expo Entry Portals are all 30 metres long and sit on top of bridges spanning roads around the site of the next World Expo, which is to be held in Dubai and opens 20 October 2020.

Asif Khan designed the portals as part of the four miles of public realm the studio has designed for Dubai Expo 2020.  The 173-day-long event expects to welcome 25 million visitors.

Guests will enter through one of the 21-metre-high gateways and walk between two screen walls underneath a latticed canopy.

At the end of the Expo Entry Portals two 10.5-metre-wide doors open on to a tree-filled courtyard.

The doors can be held in different positions. When foot traffic is lower they can be opened or just a little, or be flung wide open for events such as the opening ceremony and New Years Eve celebrations.

Asif Khan, who founded his eponymous practice in 2007, took a typical mashrabiya and folded it to create the long gateway.

"I wanted to create a mashrabiya like no other, for it to be impossibly thin and impossibly light, like a drawing in the sky, and at such a scale that it could become an architecture in itself," Khan told Dezeen.

"There was only one material that is capable of producing this effect, and that is carbon fibre."

Khan's studio pioneered a new kind of carbon fibre technique to create the entrance gates, with the help of a specialist manufacturer and an aircraft engineer. 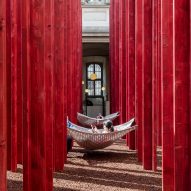 Carbon-fibre ribbon, formed of thousands of ultra-thin carbon fibres, was wrapped around a rotating mandrel that doubles as formwork in a 3D-weaving process.

These columns of latticed carbon-fibre were then craned into place and bolted to the bridges.

The design was engineered precisely to make the lattice as thin as possible while also able to span tens of metres and support itself. Despite their size, the doors can be pushed open by just one person.

"It's insanely light. The lightness mixed with the strength of the material allows you to span much further with less materials," said Khan.

"Things that look like they shouldn't be able to support themselves horizontally can. It looks like it should be way thicker than it is, and that's part of the magic."

The pattern, which has a shifting geometry when viewed from different angles, was determined by the complex equations required to balance the desired shading, air flow and dimensions.

"From afar the portals appears like suspended translucent planes," said Khan. "But when you approach them, the unexpected thinness of structure and airy-ness gives the structure a magical, gravity-defying quality."

Breezes can pass through the holes in the lattice, which produces a dappled shade that visitors will pass through on their way into the Expo 2020 site. Dubai is a hot, desert coastal emirate where temperatures can rise to 35 degrees Celsius in October.

Taking a traditional element of design and pushing it to the limit of technology is part of the spirit of the World Expo, said Khan.

"Expo is as much about innovating and showing the future as it is giving people a chance to understand the place in a new way," he said.

"When you are given this opportunity to combine innovation and a sense of place you can suggest some kind of new regional aesthetic, which I see the portals as a means of exploring."

Dubai Expo 2020 will showcase work from architects and designers from around the world. The Dutch pavilion will feature a tower of plants that will create its own microclimate, while ES Devlin's design for the UK pavilion will project poems written by artificial intelligence into space.

Asif Khan's previous work includes a pavilion for the Pyeongchang Winter Olympic Games in South Korea that was coated in Vantablack VBx2.

Photography is by Helene Binet.