Roksanda Ilincic, Benjamin Hubert and Dara Huang explained how they built their businesses at Dezeen Day last October, with Huang revealing that the secret to success as an entrepreneur is "finding people better than you".

Huang, founder of architecture studio Design Haus Liberty, described how, in order to grow her company, she had to forgo being a "generalist" and instead hire professionals who were able to better tackle areas of business where she lacked expertise.

"I literally did everything – I was the person that cleaned the studio and washed the dishes," said Huang. "But as I got bigger and bigger, I handed off those hats to specialists."

"You scale up by letting go of control and finding people better than you," she added.

Huang worked for Herzog & de Meuron and Foster & Partners before setting up a series of businesses, including lighting brand DH Liberty Lux and prefabricated housing company Vivahouse, which she co-founded.

The entrepreneurialism-themed panel also included by British industrial designer Benjamin Hubert and fashion designer Roksanda Ilincic, who told the audience that she similarly had a "very bumpy" start to launching her eponymous clothing label. 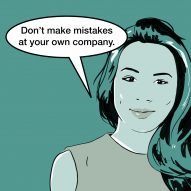 "Don't make mistakes at your own company" says Dara Huang

Serbia-born Ilincic originally studied architecture before taking on a masters in womenswear at prestigious arts school Central Saint Martins, where tutors completely reworked her understanding of the fashion industry.

"It taught me how little I knew about fashion, and that actually I had to start all over again. It was a master's course, but it was more like a school of life," she explained.

"Every single person is already a brand"

The trio went on to discuss how important it is for young designers to create an identity around their business, something which Ilincic claims is only possible if "you have a clear vision of who you are and what you believe in."

"Every single person is already a brand – because your brand is a string of your experiences from the past, and what you're doing right now," continued Huang.

"All you have to do is package it in a way that makes it sellable, so you can raise the money to build out your vision."

Hubert, however, thinks that business owners shouldn't get too caught up in their branding.

Back in 2012, the designer scrapped his self-titled studio to create tech-focused design agency Layer – a move which he says allowed him to "have different types of conversations".

"Having your name above the door means that people very often come to you for a very singular thing, but my background and training were pretty diverse," he said. "It became a bit dogmatic."

"It's natural for us to be afraid"

While dishing out business advice, Huang revealed that she still "makes mistakes every day" and that it's completely rational for young designers to be hesitant in launching their own platforms.

"I think it's natural for us to be afraid to start our own thing; when we're asked if we want on our business, on the inside we're like 'yeah I do', but we don't say it because we're embarrassed or afraid of failure," she said.

"All of it comes with confidence, and confidence comes at a different stage for everybody – especially young women."

Hubert additionally commented that starting Layer had been "extremely scary".

"You end up only having one choice – going your own way."

A number of other panels took place at the inaugural Dezeen day, including one on post-plastic materials. One of the speakers to appear was designer Natsai Audrey Chieza, who claimed there are "really promising" alternatives to the material.

The event – which was held at the BFI Southbank in central London – also featured a keynote speech by Paola Antonelli, who discussed the inevitability of human extinction.

Antonelli, who is senior curator of architecture and design at MoMA, told audiences that our natural world is "fixable, but it will never be the same".