The panel of experts discussed the positive and negative impacts technology will have on cities and the difficulties in navigating these increasingly complex urban spaces.

"I think there's some serious ethical challenges with the way we go forward from here, and the world has become suddenly more complex," said Armstrong, professor of experimental architecture at Newcastle University.

"There's no good or bad decision," she continued. "We need to stay present with the decision making, whether that's technology or how our cities evolve."

Livingston, who curated the AI: More than Human exhibition at the Barbican Centre, agreed that working out which technologies will have a positive impact, and which will have a negative impact, is extremely difficult.

"There's a habit in our culture to categorise technology and these advanced technologies as either good or bad," she said. "And the fact of the matter is, they're good and bad at the same time, and we're going to have to learn how to navigate this." 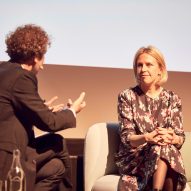 According to Livingston, this makes it hard to make broad decisions on what actions to take as cities develop.

"It's really a time in society where we're going to have to stay incredibly informed," she said. "It's hard to take broad decisions at the moment."

Numerous designers are trying to create solutions that allow people to live and move around these complex cities.

"We're trying to look at future, how you make things work better and solve problems," said Priestman, founder of PriestmanGoode, which has designed numerous transport projects including a concept for city-wide drone delivery system, Hyperloop passenger pods and a driverless tube train designs for London Underground.

"I think cities will become more enjoyable to live in the way you travel around the city. I think there'll be more walking."

"I think transport will become, in some respects, almost like creating communities. So as you travel around a city, then those are hubs where you meet people regularly through the way that you communicate with your food transport. "

As cities become more complex, they will also change the people who are living within them, according to Livingston.

"Cities are going to be substantially intelligent ecosystems," she said. "And the thing I'm most interested in is whilst they reconfigure themselves, they'll also be reconfiguring us."

"It's very easy for us to look at these design systems and say they're changing and this that or the other way, but we will be changed," she continued. "We will be physically and mentally changed by these environments."

The future cities panel was moderated by Dezeen editor Tom Ravenscroft and was one of a number of topics discussed at the inaugural Dezeen Day, which was held at London's BFI Southbank on 30 October last year.

Other discussions at the one-day event focussed on entrepreneurship, design education, post-plastic materials on the circular economy. There were also keynote speeches from Alexandra Daisy Ginsberg and Liam Young.