Architect Dara Huang says that young creatives should use their time working at other companies to make their most significant mistakes, before starting their own business.

"When you're working for a high-profile company, or any company, it's very easy for us to slag it off and feel like we're being overworked and underpaid," said Huang during a panel on entrepreneurism at Dezeen Day.

"But if you're smart, don't make mistakes on your own company – learn from where you are and absorb it."

Speaking alongside Roksanda Ilincic and Benjamin Hubert on the panel discussion, which was moderated by Dezeen's chief content officer Benedict Hobson, Huang explained that their early experiences at work will prevent young architects and designers from making blunders when they're "completely alone" and running their own business.

"What you're doing now and what you've done before – these are your formative years. Don't sit there and say 'I hate my job' – embrace it, stay late and ask all the questions you want," she continued.

"When I got tired of the company I was working for, I spent a year photographing the supplier library, asking questions about planning...I was 29 years old when I decided to start my own company, what did I know about anything?"

Huang – who established her studio DH Liberty back in 2013 – cut her teeth in the industry by working with Swiss architecture firm Herzog & de Meuron, as well as with designer Thomas Heatherwick.

She has since gone on to launch a lighting brand called DH Liberty Lux and co-found Vivahouse: a prefabricated modular housing system that aims to turn disused commercial spaces into residential units. 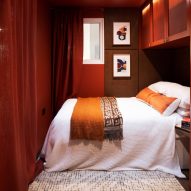 "I was really lucky to work with Herzog and de Meuron, I was a terrible employee but they had so much faith in me as a person," she said.

"Believe it or not, I was nervous, shy and didn't speak my opinions and I couldn’t understand why they had faith – it's not until now that I realised they saw something that I didn't even see in myself," Huang continued.

"It was something that, until I was forced to be an entrepreneur and carry my own weight, I didn't see."

Huang previously discussed the ins and outs of launching a design-focused business at a talk that Dezeen hosted back in 2017, when she claimed that entrepreneurs have to "wear every single hat until [they] can afford to do otherwise".

The event also saw Huang touch upon the importance of entrepreneurs being completely devoted to their business ideas.

"When you start a business you're probably not going to make any money for the first year, so you've got to love it. Money will follow passion."

MoMA curator Paola Antonelli told the Dezeen Day audience that anger can be more useful than angst in the fight to make a better future for the planet. Speculative architect Liam Young, meanwhile, argued that architects would be better equipped for the future if they applied their skills to video-game design.