Last month, Airbus announced it was ceasing production of the A380, the world's largest passenger aircraft. Transport designer Paul Priestman, who designed the superjumbo's first interior, spoke to Dezeen about its design legacy.

In February 2019, 12 years after its first commercial flight in 2007, Airbus made the "painful" decision to end production of its A380 aircraft after failing to secure enough orders from airlines.

The news came after Dubai-based airline Emirates, Airbus' biggest customer, reduced its A380 orders from 162 to 123 aircrafts.

"As a consequence and given the lack of order backlog with other airlines, Airbus will cease deliveries of the A380 in 2021," read a statement from Airbus CEO Tom Enders.

Although much admired by air travellers, it didn't take off with buyers. It is able to carry up to 800 passengers over two decks, in comparison to the 660-passenger-capacity of a Boeing 747 jumbo jet.

However, with a $445.6 million list price, it struggled to make a profit as seats were often left unfilled, while demand grew for smaller, more fuel-efficient mid-sized aircraft, particularly the Boeing 787 Dreamliner.

But while future production of the A380 will come to an end, existing models will continue to fly, and its innovative design will ensure a legacy in future aircraft design.

"I wouldn't say that the A380 is facing its downfall," said PriestmanGoode's founding director and chairman Paul Priestman, who designed the first interiors of the A380.

"The decision to end production is an economic one, but from a passenger perspective it remains a hugely celebrated aircraft," he continued. "It's an aircraft that people go out of their way to try and fly, and love to have selfies in front of."

Priestman became involved in the creation of the plane in 2000, when he and his team were asked to "design the future of aviation". They were tasked with developing the aircraft's large interiors, which were unlike anything seen before and redefined the passenger experience.

He described the task as "a dream project for a designer", granting him and his team the opportunity to design an entirely new product. 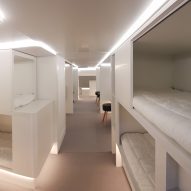 Airbus could install bunk-beds on passenger planes by 2020

"We had free reign to think big, to think about what the future of air travel could look like," Priestman said.

"I genuinely don't think we would be where we are in terms of aircraft design today if it weren’t for the A380," he added.

Since then, PriestmanGoode has designed the interiors for the Airbus A330, Boeing 777 and the first-class cabin for Lufthansa's A380 planes in 2010.

The interiors Priestman created for the original A380 gave the model its nickname at Airbus as the "wow" mockup, as this was the word people uttered when they entered the interior for the first time, according to the designer.

Priestman spoke to Dezeen about the process of designing the plane and why its place in aviation history is assured:

Natashah Hitti: How did you become involved in the development of the A380?

Paul Priestman: It was in 2000. PriestmanGoode had been invited to exhibit at a small exhibition of British design at the British Consulate in Paris organised by the Department for International Trade.

There I met a senior person from Airbus and we got talking. PriestmanGoode had just finished working on the new Virgin Atlantic interiors, and I talked a lot about design and its role in creating outstanding passenger experiences.

That was that really. Shortly thereafter Airbus invited us to tender for the design and mockup of an entirely new aircraft, and we won the tender. This was a dream project for a designer. While many aircraft are regularly updated with improvements, this was an entirely new product. We had free reign to think big, to think about what the future of air travel could look like.

Natashah Hitti: What is different about the A380 compared to other planes?

Paul Priestman: The A380's most distinguishing feature is, of course, its large interior capacity on two full-length passenger decks. And it's spacious, which means that airlines can not only carry a lot of passengers with the A380, but they can also offer public areas on board for passengers to stretch out. It ushered it a hugely prolific era for aircraft interior design.

Natashah Hitti: How did it influence aircraft design?

Paul Priestman: I genuinely don't think we would be where we are in terms of aircraft design today if it weren't for the A380. When Airbus awarded the design contract to PriestmanGoode, the dream brief was to "design the future of aviation", the interior we created was for the aircraft then known as the A3XX, which later became the A380.

Not only were we creatively free to develop the interiors, but the contract was also to supply a full-sized, fully finished working mockup of the interior installed on board an aircraft in Toulouse.

As our design work started, we built a full-scale replica of the double-deck A380 fuselage in the UK, then as we designed and made each component we fitted it to the replica to check for accuracy, then each component was disassembled, shipped to Airbus' headquarters in Toulouse and re-assembled in a A380 fuselage situated in the large Airbus Mock-Up Centre.

Hundreds of people were involved. I remember when we built it, the only usable stairs between the decks were at the rear of the aircraft, so if you were at the upper deck, and needed to get to the main deck, you had to walk along the entire length of the aircraft twice! I walked up and down that mockup so many times.

The mockup we created with Airbus was designed as a destination. The idea was that it was fully functioning, and that airline clients that came to see it could spend the whole day on the plane. There was a library, a bar with working coffee machines, air-conditioning, a lounge, and seats.

We thought a lot about the visitor's experience and carefully designed and choreographed every aspect of it. The A380 was being shown in the enormous Airbus  marketing building, which is the size of an aircraft hangar.

This was the biggest passenger aircraft in the world but we were still concerned that entering it from a very large space would give the feeling of going into a smaller space. So we designed and built a small quiet reception area to welcome visitors and then a dimly lit airport jetway type link to the aircraft. The result gave the mockup its name, and it is still known at Airbus as the 'wow' mockup as so many people that entered the interior for the first time said "wow!"

Natashah Hitti: Why is the A380 facing its downfall, and how do you feel now that production is ending?

Paul Priestman: I wouldn't say that the A380 is facing its downfall. The decision to end production is an economic one, but from a passenger perspective it remains a hugely celebrated aircraft. It's an aircraft that people go out of their way to try and fly and love to have selfies in front of. And as I mentioned previously, the A380 will keep flying. It's only future production that is ceasing.

Natashah Hitti: What does this mean for air travel in future?

Paul Priestman: As mentioned previously, the impact the A380 has had, and continues to have, on the design of aircraft interiors is long-lasting. And while future production of that aircraft has ceased, Airbus is continuously investing in R&D to create better, more efficient products, like Airspace, which we also collaborated on.

I'd like to note here also the importance that this project has had in the development of PriestmanGoode as a studio. It was a real moment for us; not only to be involved in the creation of one of the biggest products in the world, but Airbus allowed us to have our name at the entrance of the mockup and books about Priestmangoode in the on-board library. Since this project we have completed many interior design and mockup projects for aircraft manufacturers from around the world.

Natashah Hitti: What are your thoughts on the environmental issues with air travel? How can flying be made more green?

Paul Priestman: It's a complex issue. It's important to remember that flying, particularly over long distances, is convenient, and that as a result, people are going to keep flying. So for designers, our role is to see where we can have impact. There are suppliers making efforts in being more responsible in how they manufacture, for example using recycled Trevira [a flame-retardant fabric] and polyester fibres or plastics that are 100 per cent recyclable.

The durability of some materials, like wool, can also extend a product's lifespan, all of which are important. Aircraft manufacturers like Airbus continually invest into research to develop more efficient products. It's an ongoing process, but as consumer consciousness has developed, efficiency and reducing impact has come to the forefront of the industry.