Aircraft manufacturer Airbus has revealed three concepts for zero-emission commercial aircraft that would be powered by hydrogen and could be in service by 2035.

One is powered by a turbofan, another has a turboprop power system and a third has a "blended-wing body" with hybrid-hydrogen turbofans at the rear. 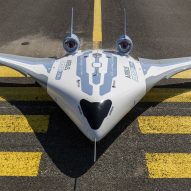 The turboprop design is also powered by hydrogen combustion in modified gas-turbine engines but uses a turboprop engine instead of a turbofan. It would be able to carry up to 100 passengers for more than 1,000 miles.

In order to make the transition to zero-emission aircraft, airports would require significant infrastructure for transporting and refuelling the hydrogen, which would require supports from governments said the manufacturer.