Milan's Mandalaki Design Studio has created a series of lights that cast boldly coloured orbs across walls, ceilings and floors.

Halo Edition is the result of the Italian studio's research on optics and the frequencies of the white light. The collection, which includes compact table lamps, floor lights and ceiling fixtures, produces a range of colourful orbs in its surroundings.

Rather than acting as traditional lights, the Halos are designed to offer illumination with projections through lenses.

"Through our optical research, we found a brilliant way to balance the physicality of the lamp while unleashing a projection of infinite shades of colour," Mandalaki Design Studio said.

"As a result, the Halo lights are more than just a source of illumination; they're a graphic projection, precise and defined."

The unique light patterns are created through a process that involves altering the frequencies of white light to eliminate unwanted frequencies and curate the colours that get emitted. It also manipulates the angle of refraction to produce the visual palette. 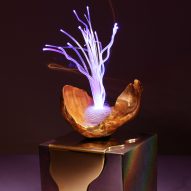 "We also control the blurs using a sophisticated technique that produces the light in different ways according to the angle of refraction. The result is an incredibly vivid colour palette."

Each of the pieces comprises a solid iron base and slender stand that allows for easy transport, and the ability to be set up in any environment. The rotating heads mean users have total control over the direction of the illumination.

"Using traditional Milanese artisanal processes and locally sourced materials, we designed a light that is an art object," the designers added. "We want people to use Halos like an optical brush, painting an environment with shapes and hues."

Each of the designs also adds onto, or slightly alters, the projection manner of the other styles.

Halo One, one of the five styles, is the only fixture in the series with a static head. It projects a solid circle with hues of red, yellow and orange. Its long stand was used as a blueprint that informed the design for the rest of the collection.

Halo Evo, meanwhile, has a rotatable head that changes the direction and angle of the illumination. It comes in two colour sets: Sunset Red, with shades of orange, yellow and red, and Deep Blue, a blue light bordered with warm hues.

The widest orb is cast by Halo Big, which is capable of producing several other graphics, while the compact Halo Up is designed to be placed in any environment.

An adjustable black anodised rod attaches to the ceiling to form Halo Sky, the collection's pendant light model that projects its glow on a lateral wall.

In 2019, the studio worked with American company BoutiqueHomes to design a fully customisable prefabricated micro home and collaborated with Italian car company Estrima to design the"first" electric concept car made from 80 per cent recycled plastics.

Photography is courtesy of Mandalaki and Marco Menghi.