Raised courtyards filled with plants are cut into the facade of a house in Nam Dinh, Vietnam, designed by Landmak Architecture.

Called to Đậu Đậu House, the architects designed the home as a compact cluster of miniature dwellings.

Built on a small plot of nine by 11 metres, the four-storey home sits opposite a busy traffic junction.

Landmak Architecture arranged the floor plans so the house is turned in on itself to minimise disruption and noise.

"We created a box block with a minimalist front and started sculpting the window and loggia positions to get the light for the rooms inside", said the studio.

"Then we 'dropped' within this minimalist and modern box a more traditional space with many roofs and small gates, like curling a street into a vertical direction."

The floor plan of each level is roughly divided into communal living and study spaces towards the front.

Bedrooms, bathrooms and staircases are set to the rear.

On the ground floor, the entrance opens directly into a large living space, which opens onto a landscaped winter garden with a pool.

This space leads via a thin steel staircase to a mezzanine kitchen and dining area, framed by an elongated arched window in the facade.

To ensure adequate light and ventilation throughout, the winter garden is one of a series of small planted voids have been cut out of the home's form.

These voids create both courtyard and balcony areas.

The winter garden space sits at the bottom of one of the largest of these voids.

It is a double-height space overlooked by a first-floor bedroom, visible through openings made in the staircase.

Sliding glass doors separate these green spaces from the interiors. 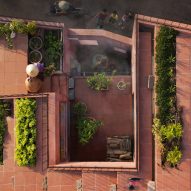 This allows the home to be opened up to the elements while maintaining privacy behind the deep reveals in the home's facade.

The third floor is designed as the children's space, painted with blue shapes and cartoons, including a ceiling fan made to look like a plane.

It connects to a hammock that stretches over the top of the winter garden void alongside a daybed area.

Thresholds between rooms are marked by details that bring a street or yard-like feeling to the interiors, such as small sections of overhanging roof or gate-style wooden structures that encase distinctive arched openings.

On the fourth floor, a study, altar room and bathroom and sauna surround a tropical garden space and balcony, sheltered by a high parapet.

The use of planted areas to bring light and air into homes is a strategy frequently used by Vietnamese practice Vo Trong Nghia, which recently took a similar approach of folding a cluster of smaller spaces into one interconnected form for Thang House.