Chenchow Little Architects has completed a house in the Glebe suburb of Sydney featuring upside-down arches in the walls and curved openings in the floors.

Glebe House is designed to playfully reference its neighbour – a Victorian terrace with decorative arched windows.

Instead of matching these arches, Chenchow Little Architects chose to use them in various other ways.

On the facades, the shapes are turned upside-down to create large, high-level windows with views of the Sydney skyline.

"Unlike traditional Victorian houses, the arched openings in the Glebe House occur in both elevation and on plan," explained the studio, which is led by architects Tony Chenchow and Stephanie Little.

"The arched windows on the elevation align with arched cutouts in the floor-plate to create three-dimensional internal voids within the space."

Glebe House is the residence of a family of five. Previously, the site was home to an old cottage, but this was demolished to make room.

The shape of the house was dictated by surrounding buildings, which also include a 1980s housing block.

To respect setbacks from these existing properties, as well as the sight lines from their windows, only one volume was possible on the site.

This shape is roughly four-sided in plan, but the northeast end is significantly wider than the southwest end, and there are some angular setbacks at the building's corners.

Inside the building the layout is kept fairly simple, to allow the geometry of the arches to be fully expressed.

The ground floor is largely open-plan, containing a kitchen, dining area and living space, and a connecting sheltered terrace. This terrace is fronted by the only arched window with a traditional orientation.

Upstairs, rooms are organised either side of a central corridor, which is punctured by curved openings in three places. There are four bedrooms on this floor, including a master suite with an additional two floor openings.

"The double-height voids maximise light penetration into the centre of the dwelling and add to the sense of space," added the studio.

Textural material finishes were chosen both inside and out. White-painted timber boards are arranged vertically across the facade, as well as in the living space and bedrooms, while the bathrooms feature hexagonal mosaic tiles. 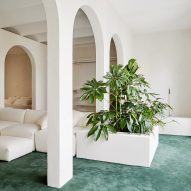 Archways appear throughout Penthouse in Barcelona by PMAA

"The vertical mullions of the windows reinforce the verticality and rhythm of the cladding and help to abstract the facades of the dwelling," said the architects.

Chenchow Little Architects often works on quirky residential projects. The studio was longlisted for a Dezeen Award in 2018 for its Darling Point Apartment.