Alabama practice Jeffrey Dungan Architects has modelled this white-rendered concrete house in Florida's Panhandle on a range of architectural styles.

Harrison Residence is in Santa Rosa Beach, Florida, a small town on the Gulf of Mexico known for its white sandy beaches and clear water. It forms part of a greater area in the northwest of the state called the Panhandle after its shape.

Jeffrey Dungan Architects built the three-storey home next to a nature preserve and a coastal dune lake, Draper Lake, which Dungan notes is a unique natural occurrence.

"They are extremely rare and only occur in about four other places in the world: Madagascar, New Zealand, Australia and Oregon," Jeffrey Dungan told Dezeen. "These are unique ecosystems."

"The dunes are all that separate the lakes from the Gulf of Mexico and during storms the dunes are breached and the fresh and saltwater mix," he added.

The architect created the waterfront home in an L-shape with cast-in-place concrete, used to withstand the region's hurricanes and storms. White stucco covers the facade and makes the project stand out against its dense pine and shrub surrounds.

Dungan created the house for clients who enjoy travelling but who also wanted a beach home to relax in. 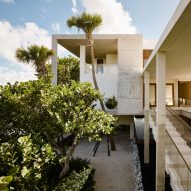 "The clients love to travel all over the world and in some ways they have a bohemian kind of bent, so intuitively I wanted the house to speak in a European accent, but also it's a beach house, so there should be something playful about it," Dungan said.

The layout comprises a living room, two bedrooms with ensuites, and a covered outdoor sitting area on the ground floor.

The ground level is elevated to take cues from an element of Renaissance architecture known as a piano nobile. It was chosen by the architect "to make the most of views and also to take advantage of breezes coming up from the ocean."

A staircase in the entry leads to an open-plan kitchen and dining room upstairs, as well as a living room, master suite and office. Also located on the first floor are a screened-in outdoor area, a terrace and an outdoor shower.

The top floor contains a sitting nook and a bathroom. Rounding out the residence is a two-car garage, located below the master bedroom.

The interior design features contemporary designs that contrast with the classical architectural elements of the building.

A monochrome colour palette of whites and creams drives the decor with black accents for contrast, including window trim. Pale wood covers most of the floors and ceilings.

"I am always trying to have a sense of history in my homes, and yet 'historical' is the last thing I would ever want to be said about my work," Dungan said.

"I'm always after something that feels organic and alive," he continued. "I love movement in architecture in lieu of stiff and rigid places that suck the life out of you."

Harrison Residence is located in the Florida Panhandle, a region that is closer to Alabama and Mississippi than it is to more well-known Florida cities such as Miami and Orlando.

Dungan's studio, which he founded in 1999, is based in Birmingham, Alabama.

Florida is home to many waterfront properties, including San Marino Residence by Bohlin Cywinski Jackson, a concrete home by Studio MK27  and a villa by filmmaker Alejandro Landes, and all of which are in Miami.

Photography is by William Abranowicz.