Located in suburb of Fitzroy North the home, called Merri Creek House after a nearby waterway, references its surroundings.

"Monumental turrets reference geometric farm relics and tall brick water structures, an obsession shared by both Wowowa and the client," explained the studio.

"Their robust nature feels grounded and protected against the elements – so solid that no fire or flood could bring them down. Given the site's proximity to Merri Creek and surrounding bushlands, a hearty response felt appropriate."

To the south, one of these turrets houses a play area below and a study above.

In the centre, a second turret houses a double-height dining area wrapped by a wooden staircase that sweeps up to the second storey,

Both are illuminated by thin full-height windows that can be opened.

The study area opens onto a decked terrace above a garage space, which looks out onto the street to face the terraces of its neighbours.

An entrance between these two turrets leads through the "dining turret" into a large living and kitchen space.

This space can be opened out onto covered terraces on two sides.

A copper canopy supported by thin steel columns shields the windows that run along the living room's edge.

Yellow and white-striped awnings can be rolled down to provide sun protection.

"The most playful moments are the spaces between the turrets, as the home twists to provide the workhorse amenity required in any family dwelling," described the studio. 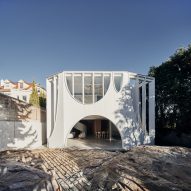 "Throughout the day, dappled textures and refracted colours animate the interiors, as the light moves around the sculptural home."

The third turret to the north has been designed as a "deconstructed ruin" half-enclosed by a section of brick wall.

It bulges into the living room and opens towards the creek, with an arched window sheltered by a copper canopy.

For the interiors, white walls and ceilings are contrasted by areas of exposed brick and accents, including a pink marble counter in the kitchen.

On the first floor, more colourful wall finishes include blue-painted walls in the study and bathroom.

Wowowa, which was founded in 2010 by Monique and Scott Woodward, previously made use of similar curved, brick forms for another house in Fitzroy North, expanding a Victorian building with a scalloped brick extension.

Photography is by SMG.