Aerial photographer Tom Hegen has captured large greenhouses throughout the Netherlands from the air to draw attention to questions over how we will feed the world's growing population.

Named the Greenhouse Series, the photographs document the vast number of the LED-lit agricultural buildings in the country, which are used to feed more people while using less land than traditional farming.

Each photograph resembles an abstract artwork, however after grabbing attention of viewer they are intended to spark contemplation about why the greenhouses are needed.

Hegen hopes the photographs will raise questions about what the future of the planet might look as the demand for food continues to soar as the global population increases.

"One of the main questions that will affect our future life on earth will be, how can we feed the ever-growing world population with shrinking resources?" Hegen told Dezeen.

"According to the United Nations, the world's population will grow from today's 7.5 billion people to 10 billion in 2050. And as natural resources like farmland and water become scarce, feeding the world will become an even greater challenge," he continued.

"Those indoor farms are a prototype to experiment on how to maximise the yield with little space and limited resources."

The greenhouses Hegen has photographed are found throughout the Netherlands. They are used to grow crops around the clock by artificially controlling light and humidity inside and help make the country one of the world's biggest exporters of agricultural products.

Hegen's series seeks to raise awareness of the negative effects of the greenhouses too, including light pollution and growing crops out of season to be transported around the world.

Hegen's idea for the photography series was the result of him reading about the structures in a science magazine, which led him to wonder how they integrate with their surroundings.

He therefore captured The Greenhouse Series from the sky in a helicopter, directing its pilot throughout to ensure he could capture photos from the desired angles.

"I was wondering how these greenhouses may look in the dark, if they are covered and how they integrate into the surrounding environment. All this made it appealing for me to visit the area," Hegen continued.

"Aerial photography is the only way to make the glowing patches of greenhouses visible." 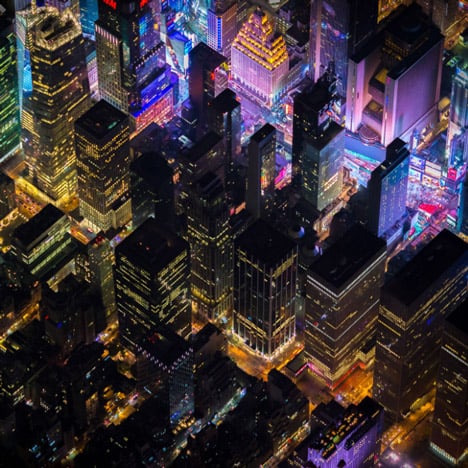 The Greenhouse Series forms part of Hegen's wider photographic work that explores of the anthropocene – the age in which humans are the dominant force impacting the earth's geology.

His decision to carry out photography with a birds-eye view is an attempt to offer a fresh different perspective on the scale of humans' impact on the planet.

"I find it really tempting to play with the contrast of beautiful compositions and deeper topics," Hegen explained.

"I use abstraction and aestheticisation as a language to inspire people and also to offer the viewer a connection to the subject as they need to decode what they are looking at."

His other photo sets that explore the anthropocene range from aquaculture and icebergs – all unified by an ambition to raise awareness of how human activity may affect the future of life on earth. Hegen hopes it will encourage people to make more of an effort to make a difference.

"We are a world that is driven by consumerism and permanent growth, and there is a price to pay to keep this system go. I am doing this to show people the impact we have on our environment," he concluded.

"Hopefully, people will understand, start thinking about our relationship with our environment and maybe even take responsibility for it."

Alongside advancements in aerial photography, the proliferation of drones is seeing more buildings around the world being photographed from the air.

In 2019, Márton Mogyorósy used drones to document Barcelona's architectural symmetry from above, and Dezeen rounded up photos of 12 homes that have been captured from a bird's-eye view.