Founded in 2011, NeueHouse describes itself as a "cultural home for creators, innovators and thought leaders". The company's new workspace in Los Angeles joins two other locations in New York City and LA's Hollywood neighbourhood.

DesignAgency, a studio based in Toronto, oversaw the design of the new outpost.

"Catering to the modern creative workforce, NeueHouse Bradbury is a sophisticated and comfortable work environment with amenities that go beyond anything seen in a conventional office," the practice said.

The outpost occupies the entire second floor of the Bradbury Building, a five-storey structure dating to 1893.

Commissioned by the mining tycoon Lewis L Bradbury, the building was designed by draftsman George Wyman who drew upon an initial scheme by architect Sumner Hunt.

The building has appeared in films, television shows and music videos, including Ridley Scott's Blade Runner. It was designated a National Historic Landmark in 1977.

Exterior walls are made of brick, sandstone and terra cotta. A narrow lobby leads to a grand, light-filled atrium that features ornate ironwork and birdcage elevators.

Work areas and amenity spaces are positioned around this central void. 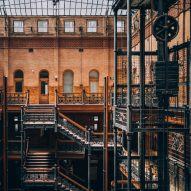 "It was a real privilege for us to work with such an iconic American building and this gave us a great starting point," said Anwar Mekhayech, founding partner at DesignAgency.

"In response to its rich visual history and its bold character, we decided to add a new layer that is modern and fresh, with soft and graceful flourishes."

A number of original elements were preserved, such as exposed wooden ceiling joists and oak-framed windows that rise 11 feet (3.4 metres). The team also retained 20 historic fireplaces, which are fronted with weathered and glazed bricks.

Existing features were merged with modern additions including Versailles parquet flooring and linen drapes. Incorporated throughout are comfy furnishings with rounded edges that were custom-fabricated by Irish manufacturer Orior.

At the bar, NeueHouse co-working members can enjoy a coffee or cocktail while sitting in rose-hued stools lining a marble-topped bar. Globe-shaped pendants by Lee Broom are suspended overhead.

"We are thrilled to be opening our third NeueHouse in such an architecturally significant and iconic building as Bradbury," said NeueHouse's CEO, Josh Wyatt.

"Our expansion to Downtown LA comes at a time when the area is booming, and the local creative community is in search of a cultural and commercial hub".

Other new projects in Downtown Los Angeles are a Soho House location with a rooftop pool, a showroom for Danish brand Hem and a glass courthouse building by Skidmore, Owings & Merrill.

NeueHouse has marked the opening of its new location with a series of salon-style talks with prominent LA creatives including architect Kulapat Yantrasast and futurist Liam Young.

Photography is by Nikolas Koenig.