The remnants of a shopping centre evoke concrete follies at Tainan Spring, a sunken park and public pool by MVRDV in southern Taiwan.

Described by MVRDV as a "lush lagoon", the project replaces the vacant China-Town Mall close to Tainan's canal network and forms part of a wider masterplan to rejuvenate the area.

It has been surrounded by local plants that will "develop into a lush jungle" overtime, offering the city greener public spaces that mimic natural landscapes found elsewhere on the island.

"In Tainan Spring, people can bathe in the overgrown remains of a shopping mall," said Winy Maas, founding partner of MVRDV. "Children will soon be swimming in the ruins of the past – how fantastic is that?"

"Inspired by the history of the city, both the original jungle and the water were important sources of inspiration," he continued.

"Tainan is a very grey city," he continued. "With the reintroduction of the jungle to every place that was possible, the city is reintegrating into the surrounding landscape." 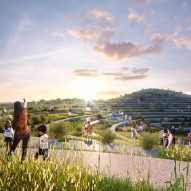 Tainan Spring replaces the China-Town Mall that was built over the city's old harbour in 1983, beside the canal. According to the studio, the shopping centre had since become a "drain on the vitality" of the city.

The Tainan Spring lagoon is embedded into the shopping centre's former underground parking zone, positioned down below street level.

This is surrounded by plants, playgrounds, gathering spaces, and arcades made from the shopping centre's foundations.

According to MVRDV, the pool is designed to offer a gathering space suitable for all seasons.

The water level change in response to the rainy and dry seasons, and in summer months water vapour mist will be sprayed to lower temperatures – rather than depending on air conditioning.

Preserving elements of the shopping centre as part of Tainan Spring was important to MVRDV as the studio wanted it to serve as a reminder of the "the historical decision to close a port in favour of a mall".

The studio decided to retain the foundations as follies, which will be transformed into spaces for shops or kiosks in the future.

Tainan Spring was commissioned by the Urban Development Bureau of the Tainan City Government to create public space, but also to help improve pedestrian pathways and reduce traffic in the city.

As part of the scheme, a number of local plants have been introduced around the site on Haian Road to help further the amount of greenery in the area. The studio expect for the site to reach its desired appearance of a lush garden in two to three years.

MVRDV is a Rotterdam architecture studio founded in 1991 by Maas with Nathalie de Vries and Jacob van Rijs.

Tainan Spring was first revealed in 2015 under the name of Tainan Axis, and featured in Dezeen's roundup of architecture projects to look forward to in 2020. It is the first of two MVRDV projects slated for completion this year in Tainan, with the food market with undulating rooftop farm terraces in the final stages of construction.

Elsewhere, the studio is developing a residential development in the Netherlands that will have a facade of plant pots, and collaborating with Airbus on an investigation into how vertiports can be introduced into cities.