Betsky, who resigned from the School of Architecture at Taliesin in November 2019, will begin his new role on 1 June 2020, it was revealed this week.

He said that he is "very excited about the opportunities offered by Virginia Tech".

"The School of Architecture + Design in particular has a stellar history of experimentation and leveraging its position within a land-grant institution to serve its many communities – particularly in the Commonwealth of Virginia, but also beyond," Betsky added.

The dean of Virginia's College of Architecture and Urban Studies Richard Blythe said Betsky's credentials will help to "expand its global reach, activities, and influence". 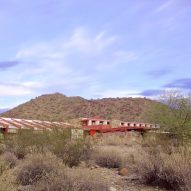 "His international standing and connections in architecture and design are considerable and will undoubtedly help the college expand its global reach, activities, and influence."

Betsky will replace director Hunter Pittman, who has been in the position since 2016. Pittman will become an associate professor and continue research and teaching in undergraduate and graduate programmes.

Betsky, who is also a regular columnist for Dezeen, was made president of the School of Architecture at Taliesin in 2017, two years after he was made dean.

His move to Virginia comes amid turmoil at the School of Architecture at Taliesin, which Frank Lloyd Wright established in 1932.

In January, the school made the "gut-wrenching decision" to close as it could not come to a financial agreement with the Frank Lloyd Wright Foundation. But earlier this month, the school voted to reverse its decision to close after a public outcry allowed it to secure additional funding.

The vote, however, does not necessarily secure the school's future as the foundation, which owns the buildings the school is housed within, has to approve the decision.

"The school board is now calling on the foundation to allow the school to extend its existing agreement so it can remain open, but the foundation is being resistant and still retains the power to force the school to close unless a deal is reached," the board said in a statement.

The decision to close the school led to an outcry in the architecture industry. Architect Ben Aranda called it "a tragedy" in a comment thread on Dezeen. "The foundation has removed the soul of Taliesin for selfish interests," he added.

First-year student Alex Martinec also reflected on how the closure could mark not just the end of a physical institution, but the architect's way of thinking.

The Frank Lloyd Wright Foundation funded the school up until 2017. The two separated after the school was threatened with losing its accreditation to award architecture degrees as it was not an independent organisation.

The institution was renamed the School of Architecture at Taliesin as part of its break from the parent organisation. Betsky, 62, was born in Missoula, Montana but grew up in the Netherlands. He returned to the US to study, gaining a bachelor's degree in history, the arts, and letters and an architecture masters from Yale University.

Photo is by Roderick La Foy, courtesy of Virginia Tech.

More School of Architecture at Taliesin