An extensive overhaul of Montreal's Olympic Stadium building by local firm Provencher Roy has opened up the facade of the swooped tower to create offices "bathed in natural light".

Provencher Roy designed the overhaul of the structure, which was built for the city's 1976 summer Olympics, for financial institution Desjardins. Its online services division occupies 150,000 square feet (14,000 square metres) spread out over seven of the tower's 12 office floors.

"The thousand of employees of the financial institution now enjoy these modern workspaces, bathed in natural light," said Provencher Roy, which first unveiled the project in 2018.

Designed by French architect Roger Taillibert, Montreal's Olympic Stadium building has a prominent curved tower that juts above the stadium at an angle to overlook the sports field below. Rising 575 feet (165 metres) high, it has held the record for the world's tallest inclined tower since its construction.

The project entailed a number of changes to the stadium. The most significant was replacing the existing facade made of concrete panels attached to the structure, with a glass curtain wall.

The three-sided floor plate is shaped like an isosceles triangle; the two long sides of which are now fronted with glass. The renovation exposed the structure's dramatic angled columns, which form an "architectural promenade" filled with informal seating, collaboration tables, and plants.

Employee workstations are organised in an open-plan, with meeting rooms and amenity spaces around the building's centre. A monochrome palette runs throughout and is contrasted with wooden furniture, and green accents that match the company's corporate identity. 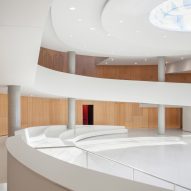 There are also references to the tower's history throughout the project, including murals depicting the Olympic torch-lighting ceremony at the opening of the games, and a faceted lobby ceiling that references Taillibert's original design.

"In addition to ensuring a work environment that encourages exchanges and creativity, the main purpose of the adopted concept was to symbolise the history of the tower," said the firm.

After the Olympic games, the tower was used by a variety of sports-related organisations, before being left vacant for nearly 30 years. The rehabilitation is part of a larger project for Montreal's Olympic stadium, which began in 2015 and includes improvements to the stadium and surrounding grounds.

Desjardins' employees first moved into the building in the summer of 2018. As part of the overhaul, the tower was nicknamed "Montreal Tower", removing its previous reference to the Olympics.

"More than a symbolic place that was once dedicated to the Olympic Games, the Montreal Tower is now an indelible mark on the collective imagination," said Provencher Roy.

It recently added a pavilion beneath the National Assembly parliament building in Québec City, which is accessed by a spiralling ramp. The firm also acted as the architect of record for OMA's Pierre Lassonde Pavillion at the Musée des Beaux-Arts du Québec.