Tomoaki Uno Architects has limited the material palette of this windowless Japanese house to cedar and cypress to offer its sick owner a pared-back and therapeutic home.

Named Ogimachi House, the sky-lit dwelling in Nagoya was commissioned by a young client for his mother, who required a private and calming space to help her recover from an illness.

Tomoaki Uno Architects' design is deliberately simple, and built almost entirely from wood in recognition of the material's physical and psychological benefits.

"The choice of materials and finishes was made of natural materials as much as possible, and I aimed for healing architecture in all aspects," said the studio's founder, Tomoaki Uno.

"I believe in the beauty of the ordinary things," he continued. "The most interesting is lurking in the most uninteresting. This architecture was made that way. I tried to fill the maximum function with minimal material."

Ogimachi House is also complete without any windows, and instead relies on 37 skylights for natural light. This was designed by Tomoaki Uno Architects to help retain the owner's privacy from neighbouring houses.

"One of the most important considerations in this home is how it relates to private and social," added Uno.

"Eventually, I proposed a house with no windows on the wall. Instead, I designed 32 fixed skylights and fiv large openable skylights," Uno explained.

"When his mother started living there, I heard she was quite stressed. But I'm relieved to hear she is now very at ease."

Tomoaki Uno Architects chose to build Ogimachi House using cedar and cypress as they are the two most widely distributed woods in Japan. 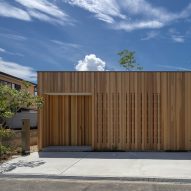 It has been constructed using a traditional Japanese building method called Itakura, in which thick boards of solid cedar are joined without nails to form roofs, walls and floors.

The technique originated for the construction of kura, otherwise known as storehouses, and is understood to enhance a building's fire resistance according to Uno.

Inside, the house is built around a grid-like structure containing all the living spaces, which is wrapped by a double-height corridor lit by the strips of skylights.

On the ground floor, this grid hosts open-plan living and dining areas, alongside an enclosed bedroom, toilet and wash room.

A central flower-like staircase winds up to the first floor above, where there are four more private rooms, which feature the openable skylights.

Here, there is also a bridge over the ground corridor that leads out onto a linear balcony.

Tomoaki Uno Architects is a Japanese architecture studio founded by Uno in 1990, which is based in Nagoya in the Aichi prefecture. In 2012 the studio completed a dark concrete house lit by two narrow light wells.

Other windowless Japanese houses on Dezeen include Black Box by TakaTin and Kamiuma House by Chop + Archi, which featured in our roundup of 10 bunker-like houses that offer total privacy.