The Design Museum is closing its doors today, following British prime minister Boris Johnson's official advice that citizens should avoid all public gatherings and non-essential travel in light of the coronavirus pandemic.

As the UK death toll rose to 71 on Tuesday, the museum announced that until further notice, no visitors will be allowed into the museum's John Pawson-designed home on Kensington High Street in London.

Exhibitions that were set to open in April and May will be postponed. This includes Electronic – an exploration of how electronic music has been shaped by design and technology – as well as Sneakers Unboxed, which was set to bring a range of cult and limited edition trainers before the eyes of collectors.

"The work of the Design Museum will continue"

"The whole cultural sector is responding to a rapidly developing situation, trying to implement measures that safeguard the well-being of all staff and visitors," explained Tim Marlow, the museum's chief executive and director, who took up his post in October of last year.

"No-one doubts the severity of what we will face in the weeks ahead but it's clear that museums in general, and one devoted to design in particular, will have a significant role to play in the future and in spite of the need to close our landmark building temporarily, the work of the Design Museum will continue." 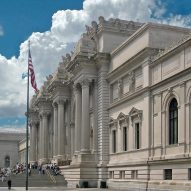 The Met, MoMA and Guggenheim close in response to spread of coronavirus in New York

This comes after a record 229,360 visitors flocked to the museum's paid programme in the last financial year.

A slew of other British museums and galleries have also opted to close their doors, including London's Victoria & Albert Museum, the Hayward and Serpentine galleries and the Barbican.  All four Tate galleries – including the Tate Modern, Britain, St Ives and Liverpool  – have also closed.

Museums around the world closing doors

In the US, the Met, MoMA and Guggenheim, as well as the Cooper Hewitt Smithsonian Design Museum and a number of smaller galleries have closed their doors as the virus continues to spread across the country.

Other European countries including Italy, Spain, France and the Netherlands have chosen to ban mass gatherings, as the continent has become the new epicentre of the pandemic.

However, the UK government has stopped short of forcing the closure of public spaces, leaving it to individual businesses to make their own choices.

The Museums Association has warned that this would prevent cultural organisations from being covered by their product insurance, delivering a "fatal blow" to the sector financially.

"Museums are a vital part of the UK economy and a major employer, as well as being vitally important cultural and scientific institutions which are crucial hubs for their communities," the association said in a statement.

"Museums also support a high proportion of freelance workers in addition to staff. In the current circumstances, the sector and its workers face an uncertain future."