White-painted bricks and pale timber define this home in Spain by Escribano Rosique Arquitectos, set around a series of paved courtyard spaces.

Called Casa SD, the house is located close to the city of Valladolid in northwest Spain.

External patios on both levels act as outdoor extensions of its living spaces.

"The plot is located where the views out are not of particular interest," Escribano Rosique Arquitectos co-founder Esther Escribano Rivera told Dezeen.

"So we decided that the idea of building the house around a landscaped, external space made a lot of sense."

Two courtyards positioned to follow the sun throughout the day organise the plan of the home.

To the east a long, thin courtyard is aligned with the main entrance, dividing the home into a block housing the garage and plant room and another housing all of the living spaces.

A square courtyard sits in the centre of the living area, hugged by an L-shaped kitchen, living and dining area.

This courtyard spills out onto an external patio shielded by a slatted wooden partition, before opening out to a garden with a pool.

"The living areas are a series of connected spaces, which can keep their own character and independence with no actual divisions," said the practice.

External windows have been kept to a minimum and small in size.

On the first floor, a high parapet surrounds a terrace connecting to the guest bedroom,.

Large, wood-lined openings, in contrast to the rest of the home, provide views out over the landscape.

"The terrace on the first floor is the only place where we generate openings which look out towards the landscape, over the surrounding residential properties and towards the hills," said Rivera.

"We think it is important that materials express themselves, so we decided not to hide or cover them, except for the white paint we applied to the brick," said Rivera. 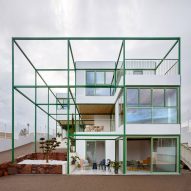 "We love the defined shadows that the sun produces in Spain, and white painted brickwork maximises this effect whilst also helping to minimise the massing."

A similar strategy was adopted by Architect Bernardo Richter for a recent home in Brazil, which features an almost windowless brick exterior and looks into a central courtyard.

Photography is by Juan Carlos Quindós.