The stone base of a former mill has been repurposed as a raised plinth for house in Aberdeenshire, Scotland, designed by TAP Architects.

Dug into a gently sloping site, the granite mill building was once surrounded by a variety of agricultural structures.

The new home – called The Larch Mill on account of its black Siberian larch cladding – is designed to reference this history.

Its owners initially wanted to incorporate the ruined mill into the home itself,  but flood risk in the area restricted any new building to the higher portion of the site.

To solve this, TAP Architects used the old mill's stone walls as a base.

"By removing the roof of the mill we were able to conceive of the base of the building as a plinth for the new construction above, thus treating it as part of the site topography - the built equivalent to a rock outcrop," said the studio.

This stone base houses storage and a plant room with a separate entrance.

An exterior staircase leads up to an L-shaped area housing the living spaces, accessed from the higher plateau.

"We developed a proposal that organised the house into two parallel bays," said TAP Architects.

"The first appears as a linear structure with half its length on the solid ground of the plateau and the other projects out of the granite walls of the mill."

In order to build atop this stone base, a lightweight structure of steel and timber was used.

The wing at the top of the slope is built upon new concrete foundations.

Floor-to-ceiling windows at both ends frame views over the landscape. 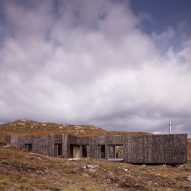 The Larch House's interiors are organised around two pieces of furniture. The first is a ten-seat antique dining table that acts as a focal point for the living, dining and kitchen wing.

A baby grand piano sits in a music teaching space in the linear wing.

Two bedrooms, one to the south and one to the north, feature east-facing windows to bring in morning sunlight.

The master bedroom also looks out to the west.

An area of paving surrounds the entire upper level of the home, opening into a small terrace and garden space to the north.

This patio is sheltered from the wind by the place where the house's wings meet.

Simple white interiors and skylights create bright, open spaces which focus on views of the surroundings.

The agricultural architecture of rural Scotland has inspired many architects working on similar sites.

Mary Arnold-Forster designed a house on the Isle of Skye that has an industrial-style metal exterior.

Haysom Ward Millar Architects won RIBA House of the Year with a barn-style cottage on the edge of a loch in the Scottish Highlands.