Mary Arnold-Forster Architects designed the tin-clad Black Shed house on the Isle of Skye for an architect and a rabbi.

Douglas fir was used for the interior of the Scottish house to emulate the "feel and warmth" of a traditional Scottish blackhouse, which were originally built to shelter farm workers and livestock from harsh weather conditions.

The Black Shed, which is located in the working crofting town of Heaste, was designed for an architect and a rabbi who both "have an academic interest in melancholy".

"Being both happy and sad at exactly the same time is human and acceptable," said Mary Arnold-Forster Architects.

"The Black Shed is an expression of that. It is sombre, quite and restrained yet full of joy."

Black Shed sits low in the landscape perpendicular to a studio building with a semi-sheltered entrance space between them.

A section of old stone wall marks the boundary of the site, part of which has been left as a meadow.

The main space in the simple, two-storey building is a double-height living, dining and kitchen room. 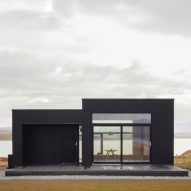 To create a warmth into which the occupants can retreat, the interior has been clad entirely in Douglas fir, wrapping seamlessly from the walls to the roof and forming cupboards, bookshelves and window reveals.

"Traditional blackhouses were not built to exploit views," said the architecture studio. "Instead, occupants worked outside and the houses provided shelter."

The house is surrounded by dramatic views of mountains and Loch Eishort, with a few choice openings in the structure placed to trace the sun from the upstairs bedroom in the morning to the western gable in the evening.

Openings to the north look out to raised beds, giving the home the feeling of being dug into the landscape, while to the south the home overlooks a sloping topography down towards the Loch.

Several architects have responded to the landscape of Skye with rugged structures, such as Dualchas Architects with their blackened-oak holiday home, and Rural Design with a self build, corrugated metal retreat.