A visitor centre for the village of Xiahuangyu, China, is formed of interconnected pavilions built around existing pine trees by DnA_Design and Architecture.

Called Pine Pavilion, the project in Songyang County is made of wood, with big glass windows and doors looking out onto the Songyin River.

The studio worked alongside the county government to develop a space for the village to encourage in a more sustainable form of tourism.

Located on a narrow strip of land between the river and a fishpond surrounded by pine trees, the pavilion is part of the wider Songyin River Scenic District Development project.

"As a public facility for both the village and tourists, these facilities will introduce the village's heritage and history, inviting tourism as an effective strategy to regenerate the village and increase circulation," said the studio.

"[Pine Pavilion is] a playful art installation introducing the heritage and the context, a large-scale, miniature landscape bonsai of this pine forest."

Sitting atop a concrete base, a sequence of pine frames form a long, thin run of interconnected volumes.

Pine was chosen as a nod to the area's heritage. Songyang County's has a history of pine resin production dating back over a thousand years.

Many of these frames have been infilled with wood or glass, while others have been left open to the elements.

In some of these open areas, existing pine trees have been built around and brought into the structure.

Full-scale, black and white vinyl images on the glass of workers tapping trees overlay views of the real trees. 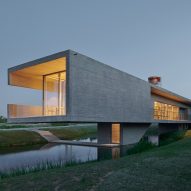 Cutting through the structure, a series of narrow passages covered by wooden brise soleil create a connection between the riverside path and the fishpond, across which views of the village are visible.

These are topped with clerestory glazing, and can be opened up to the surroundings with sliding glass doors.

In January, DnA_Design and Architecture presented the Pine Pavilion at The World Around conference in New York, which was livestreamed on Dezeen.

Also in Songyang County, Chinese architect He Wei recently transformed a traditional rammed-earth residence into a youth hostel using a series of polycarbonate-clad rooms on wheels.

Photography is by Wang Ziling.