Japanese designer and sound artist Yuri Suzuki has created a machine that can be used to make and play records.

Created with Japanese publishing and toy company Gakken, the Easy Record Maker has a recording stylus that engraves sounds onto five-inch plastic disks.

"You simply plug in your iPhone, computer, audio player – any sound source – through the mini audio jack to supply sound to record your own record," Suzuki told Dezeen.

"Put the stylus down on the surface, select 33rpm or 45rpm and start making the record."

The compact record maker is designed to engrave five-inch disks, which Suzuki described as having a "nice lo-fi sound".

Suzuki hopes that the Easy Record Maker will help introduce vinyl records to a generation that has never experienced them.

"This idea has been my dream machine since I was teenager," the London-based designer and Pentagram partner said. "With most of the existing media – CD, tape, and mp3 – it is relatively easy to make a copy or create your own original." 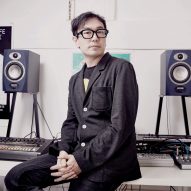 "However, as it's a complicated process with records, there is no way to create them at home," he continued. "Of course professional-use record cutting machines exist, but they are very expensive."

As a teenager in a punk band Suzuki wanted to make his own records, but never did as it was too expensive.

"My life time art projects uses records, as I believe that is the only media to physically make sound – through scratching the groove and the stylus then making sound," said Suzuki. "Records can even playback if we lost electricity in the future."

The designer believes the return of the vinyl record is due to both its warm sound and aesthetic qualities, with album artworks looking better on larger-sized record covers.

"I want to re-introduce how nice the record is, the value of having a physical music media and the sound, the listening experience," Suzuki told Dezeen.

"We are in an extreme time due to the pandemic lockup, but it's easy to call or do an online meeting; we are experiencing alternative ways of communicating," the designer said.

"I hope this device introduces another way to communicate for people – recording your own voice, making a record and sending it to a friend or family via post."

The Easy Record Maker is currently available in Japan and will be available in the UK and US later this year.

Suzuki's previous creations include a re-imagination of a sixty-year-old electronic sequencer and a sonic playground. Suzuki also composed the original music for the Dezeen podcast Face to Face.