Redbridge School in Lisbon by ARX Portugal is formed of two wood-framed buildings clad with metal, one featuring a playground on its roof.

Located at two ends of a dense site, the new structures sit either side of a pre-existing building.

"The building site was small and quite peculiar in shape – two opposite fronts of a city block, connected by a narrow strip surrounding an existing villa at the centre of the plot," said ARX Portugal.

"These constraints set the grounds for a conceptual path of two opposite building typologies unified by a common structural system and building materials – the north is part of the city while the south is engaged with the garden."

The larger building to the north houses the main programme of the school, with a canteen at ground floor level and classrooms above.

On the top floor, a large, multifunctional space serves as an events space, gymnasium and an indoor playground.

The northern elevation faces directly onto the street with a run of windows for the classrooms on each level, the brown metal-clad upper storeys sitting atop a pale stone-clad base that curves around the street corner.

Facing southwards, the building overlooks a thin, planted strip between the school and the villa.

A glazed cut through the eastern gable end creates an irregularly-shaped lightwell and entrance area, aligning with the internal corridors to draw in natural light.

At the southern end of the site, a smaller pavilion building houses kindergarten classrooms and a small teacher's space. 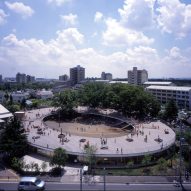 Its distinctive web-shaped plan curves inwards to accommodate the site's many existing trees.

The lower level of this pavilion has been left glazed, opening the classrooms onto a green, landscaped area with stepped stone seating.

Above, the upper storey is clad in the same brown metal at the main building.

On the roof, wooden decking provides an additional play area as well as skylights that illuminate the spaces below.

Both buildings are unified by their wooden structures, with chunky columns and roof beams left exposed on the interiors.

"Wood was selected at an early stage as the main structural and internal finishing materials due to the inherent message of its sustainable impact on nature, its warm atmosphere and the speed of construction," said the studio.

"We had one year to think of and build this school," said the practice.

Lisbon-based ARX Portugal was founded by Nuno and José Mateus in 1991.

Previous projects include a beachside civic centre on Costa Nova, and a concrete market building in the town of Abrantes.