Paris-based agency JCPCDR Architecture has invented an oak table that raises and lowers from the ceiling using a mechanism that looks like seat belts to save on space.

Designed by Jean-Christophe Petillault from JCPCDR Architecture, the Flying Table is suspended from four seat belt straps, attached to a docking element fixed onto the ceiling.

These straps are wound around a remote-controlled roller shutter motor, enabling the table to gradually lower down to the desired height.

The oak table can be left suspended by the straps to suit the height of the user, or lowered to the floor and stood on its four legs, which fold out from underneath.

When the table is brought to the floor, the straps can be detached and retracted back to the ceiling until they are needed again.

As Petillault explained, the idea for the Flying Table was born while he was working on several office refurbishment projects in Paris, and trying to find ways of making the spaces more adaptable.

"Due to cramped spaces in our city, it is very important that rooms remain versatile and can be used for multiple purposes," the designer told Dezeen.

"Meeting rooms, for example, are not always occupied, but still represent a large part of the floor plan and are often crowded with furniture," he continued. 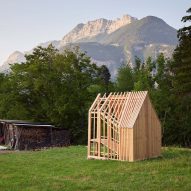 "Obviously this issue is not exclusive to offices and we have the same need for flexibility in our homes. I wanted to design a large table that could serve multiple purposes and adapt to very various situations."

The Flying Table can function as a desk or meeting table, or alternatively as a dining or coffee table.

According to Petillault, the mechanism inside the table is very simple, inspired by daily gestures and items such as seat belts, electric curtain motors, integrated lighting and foldable legs.

To highlight these everyday elements, Petillault chose to contrast them to oak wood, which makes up the main body of the table and its legs.

Custom lighting integrated into the ceiling dock is both as a functional and decorative element, making the large piece of wooden furniture seem lighter. It also adds a futuristic quality.

"This design allows a traditionally very large and heavy piece of furniture, to become a versatile, playful and contemporary object," said Petillault.

"It can be used in homes, offices, workshops – basically any place where you would use a table, only this time you will also be able to use your room for different purposes: child games, yoga, dancing, photo-shoots, parties," he added.

"On the ceiling or on the floor, this kind of table design will always remain a luxurious and sharp architectural feature, but won't get in your way."

Typically focused on architecture projects, JCPCDR Architecture previously built a small house-shaped pavilion in France, which hikers can use as a viewpoint to observe Lake Annecy.

Designed to complement its surroundings, the pavilion is made from local fir wood and is tucked in below the trees on a secluded mountainside site in Giez.