Astrid Klein and Mark Dytham of Klein Dytham Architecture explain how Japan's culture of bowing instead of hand-shaking may have helped in the fight against coronavirus, in their video message recorded for Virtual Design Festival.

"Luckily the virus hasn't hit too hard here," Mark Dytham explained in the video. "I think one of the reasons is that we wear these masks quite a lot, especially in the winter during the flu months."

He also puts the slow spread of the virus in Japan down to the Japanese culture of greeting one another without touching.

"We also don't shake hands. We bow a lot, which is really great. And there's certainly no huggy-kissy stuff and I think that's probably really helped," he said.

"The jet lag is not hitting too hard any more"

Dytham said the virus has had some positive impacts on life in Tokyo. "It gives us a lot more time to design and it's also given us a chance to pause, press the reset button and think about what really matters," he said.

"We don't have to travel as much, certainly internationally, and so the jet lag is not hitting too hard any more, which is cool," he added.

The duo's video message features in Dezeen's launch movie for Virtual Design Festival, along with 34 other other video messages from architects, designers and artists in lockdown around the world, such as Stefano Giovanni, Es Devlin, Ini Archibong, Ben van Berkel and Bec Brittain. You can watch the movie here. 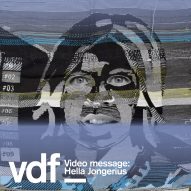 Based in Tokyo, Klein Dytham Architecture was founded by Astrid Klein and Mark Dytham in 1991.

The practice is known for projects in Japan such as a shingled clubhouse, visitor centre and ice rink in Japan's Karuizawa region and Ginza Place, a building in Tokyo's famous shopping district featuring a latticed facade.

Klein and Dytham are also the founders of PechaKucha, a programme of live talks where participants present 20 images, with 20 seconds to speak about each one.

As part of Virtual Design Festival, Dezeen broadcast an online-only session of PechaKucha's Inspire the World series, which gathers speakers from around the world to talk about creativity and ingenuity during the coronavirus pandemic. You can watch the stream here.

The duo spoke about the format of PechaKucha during a live interview with Dezeen's founder and editor-in-chief Marcus Fairs as part of Virtual Design Festival's Screentime series of live interviews. You can watch the interview here.

Dezeen invited architects, designers, artists and industry figures to record video messages from lockdown and made a montage of 35 video messages, to launch Virtual Design Festival.

We'll be posting an individual video message each day. Check them out here. To submit your own message, see the brief here.

Virtual Design Festival runs from 15 April to 30 June 2020. It intends to bring the architecture and design world together to celebrate the culture and commerce of our industry, and explore how it can adapt and respond to extraordinary circumstances.

We will host a rolling programme of online talks, lectures, movies, product launches and more. It will complement and support fairs and festivals around the world that have had to be postponed or cancelled and it will provide a platform for design businesses, so they can, in turn, support their supply chains.