James Garvan Architecture has added gabled timber-batten screens to the facade of this house in Sydney, which is meant to mimic the form of a neighbouring property.

The two-storey house in the back streets of North Bondi, a coastal suburb in eastern Sydney, has been overhauled by local studio James Garvan Architecture.

It was previously fronted by an obtrusive garage in the driveway and needed to be visually reconnected with homes along the street.

Its owner, a young man that often invites friends and family over, also wanted the house to have a more welcoming appearance on approach.

The garage has been knocked down to open up the house to the streetscape.

Its facade now comprises a series of gabled and half-gable screens made from white-painted timber battens. They've been specifically arranged to mimic the geometry of the property next door.

"The unadorned frontage gives primacy to the purity and clarity of the three staggered gabled forms whilst still maintaining a formal connection with its neighbour," founder of the studio James Garvan explained.

"The crisply-detailed simple forms of the front facade offer an alternative to the traditional Bondi semi and along with it, a sense of advancement."

The openness of the house front is playfully contrasted by the fact that the screens simultaneously hide the home's interior.

Part of the first gabled screen can be slid back to reveal a front door and porch. Other panels discretely incorporated in the screens can be pushed back for additional fresh air.

Inside, the studio has improved the formerly gloomy living spaces by creating a large void in the kitchen ceiling. Sun rays that stream in through new skylights in the home's roof are now able to reach the ground floor.

A majority of surfaces, including the original exposed-brick walls, have also been painted white to keep a bright and airy atmosphere.

Lisa Tackenberg was brought on board to help develop the aesthetic of the rooms, which have been decked out in simple materials.

Wood has been used to make the treads of the stairs and the kitchen cabinetry, which is fluted to match the appearance of the gabled screens on the exterior.

Concrete has been used for elements such as the breakfast island and bathroom sink.

"The restrained material palette relies on variety in texture and pattern, and their interaction with light and space to provide a level of richness and vigour to the project," added Garvan. 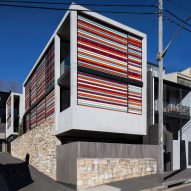 A large opening has also been created in the rear of the house to give inhabitants easier access to the pool and garden.

James Garvan Architecture is based in Double Bay, Sydney. The Australian city is host to several homes with striking facades – others include Glebe House by Chenchow Little Architects, which is punctuated by upside-down arches.

Photography is by Katherine Lu.