In the fifth and final part of today's collaboration between Virtual Design Festival and Forward Festival, Fredrik Öst explains how his creative agency Snask ended up acquiring a rock band.

"At half-past four at an afterparty, this singer sold his own band to me for $2,500," Öst said in the talk, which took place at Forward Festival in April 2017.

"The day after, he called me up and said he didn't want to sell it anymore. I said, 'I have your signature in blood'."

Öst said that his creative agency Snask, which he co-founded with Magnus Berg and Erik Kockum in 2007, strives to "challenge the industry by doing things differently".

Since acquiring the band, the agency now hosts lectures that combine live performances with design advice. The creative agency's office also features its own bar, which serves its own beer.

Snask is slang for both "sweets" and "filth" in Swedish, he revealed.

"Dare to be bold"

The creative agency's work includes a stop-motion movie for a Stockholm opera house, a hand-brewed beer for drinking in the shower before a night out with Pang Pang Brewery, and rebranding North Korea as "Love Korea" to "create a common feeling of belonging." 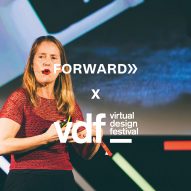 Öst structured his talk as a "setlist" of ideas and concepts that guide the agencies work. These include slogans such as "brand yourself", "dare to be bold" and "don’t mix rock 'n' roll with the professional".

Based in Vienna and founded in 2014, Forward Festival runs conferences for creatives in Vienna, Munich, Hamburg and Berlin. The conference, the centrepiece of the festival, is accompanied by various side events, such as workshops, live art sessions and networking events.

Past speakers at the festival include Oliviero Toscani, Paula Scher, Stefan Sagmeister, Kate Moross, Erik Spiekermann, David Carson and MoMA New York. The next edition of the festival will take place on 8-9 October 2020..