Italian curator and critic Beatrice Leanza has joined the Museum of Art, Architecture and Technology in Lisbon as its new executive director.The move comes as part of an overhaul of the Amanda Levete-designed museum's organisational structure instigated by EDP Foundation, the private arts body that funds the museum.

"The EDP Foundation chose someone with a diverse background in the fields of art, design and architecture and an extensive experience in project and team management, having decided to change MAAT's internal organisation with the new executive director and a curatorial council," said the foundation in a statement.

The sinuous MAAT museum, located beside the river Tagus in the Belém suburb of the Portuguese capital, was designed by AL_A, the studio of British architect Amanda Levete, and opened in 2016.

Leanza joins MAAT after spending several years in Beijing, where she first worked as a curator at China Art Archives and Warehouse (CAAW), the alternative art space founded by artist Ai Weiwei.

She then founded research studio Bao Atelier and was creative director for Beijing Design Week from 2013 to 2016.

After that she co-founded urban and social impact organisation B/Side Design, and helped set up The Global School, a design and creative research institute. 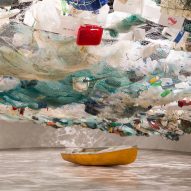 "The EDP Foundation believes that Leanza's approach in the exploration of new practical and conceptual relations among art, design and architecture, as well as her experience in the implementation of cultural strategies of community involvement and participation, will be decisive to MAAT's consolidation as a cultural institution," said EDP Foundation.

Leanza holds an MA in asian studies from the Ca 'Foscari University in Venice. She has written extensively about art and design for publications including The Guardian and The New York Times.