Today Virtual Design Festival teams up with Lisbon's MAAT museum to present its collaboration with architect SO-IL. First, Florian Idenburg and Jing Liu of SO-IL explain their Beeline installation in this exclusive video.

Later today we will feature two more videos exploring the work of SO-IL and giving a sneak peek of the "Currents – Temporary Architectures by SO-IL" exhibition at MAAT that accompanies Beeline.

At 2:00pm UK time we'll be conducting a live video interview with Idenburg and Liu of SO-IL, plus MAAT executive director Beatrice Leanza.

In this video filmed in New York by Tom Piper, Idenburg and Liu explain how the collaboration with MAAT came about.

"The MAAT museum is beautifully located on the waterfront and has a very interesting roof which attracts a lot of people, mostly to just see the view," says Idenburg in the video.

"But the inside is quite closed and quite dark. So as soon as we got there, we realized we needed to open up this space. How can we bring actually the public really into the building itself, not just, you know, on top and around it?"

The temporary Beeline installation and the Currents exhibition were both due to open on 27 March as the first phase of Leanza's new programme for the museum, which she joined last year. 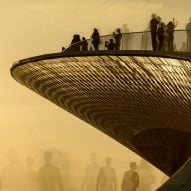 However, the projects remain shuttered until further notice due to coronavirus, so MAAT has instead teamed up with VDF for a virtual launch.

Beeline, created with the support of Portuguese cultural organisation Artworks, creates a new public route through the middle of the swooping Amanda Levete-designed building by giving "clandestine" access through the rear loading bay.

The route connects Lisbon's waterfront with the Belém district behind the museum, giving locals an easier and more direct way of accessing both the museum and the esplanade.

At the mid-point of Beeline is an auditorium designed to host a five-month public programme of events called MAAT Mode.

"Beeline basically means the most direct way from one point to another point," Idenburg said. "And so the idea of this intervention is in some way that it is a shortcut between these two entrances. But obviously it's not just a shortcut to get in and get out. In the center of this Beeline, we created this arena."

Below is a transcript of the video about Beeline:

Florian Idenburg: Last year, fall, was the first time I came to the MAAT museum. It's a very impressive museum because it's part of this larger complex next to the power plant. And it's a private museum, but with a very clear focus on art, architecture and technology. And those are three things that we think about a lot ourselves in our practice. So it seemed a very natural mix.

Jing Liu: So I think for Beatrice, our practice was very much the embodiment of a practice of the 21st century, of different cultural backgrounds coming together and also trying to always bring complexity into not necessarily harmony or confrontation but just coexistence. So I think that that was very much in line with what she's trying to do with the space and the program at MAAT as well.

Florian Idenburg: The MAAT museum is beautifully located on the waterfront and has a very interesting roof which attracts a lot of people, mostly to just see the view. But the inside is quite closed and quite dark. So as soon as we got there, we realized we needed to open up this space.

Jing Liu: What is a bit challenging of the MAAT building is that it's formally seemingly very dynamic. But it's actually quite static in the singular because of this very swooping uniform gesture.

Florian Idenburg: The visitors to Lisbon, the tourists, they come along the river and they enter the museum from there, but we wanted to really also involve the city itself, and the neighborhood of Belém. And so by opening this new entry towards the city, it's a very clear gesture towards the city. To invite them in.

Jing Liu: I think what Beeline does very well, and we hope that it would be able to achieve, is it takes that curvilinear swooping form but turns it on itself, turns it upside down, and makes it open up another entry so that suddenly the formal language that already exists started to become more active and started to become embodied with more agencies to open up, to create more complexity within.

Florian Idenburg: Beeline basically means the most direct way from one point to another point. For instance: 'he came home and took a beeline to the fridge'. And so the idea of this intervention is in some way that it is a shortcut between these two entrances. But obviously it's not just a shortcut to get in and get out. But actually, in the center of this Beeline, we created this arena.

Jing Liu: When people go into that space in the middle, that used to be just a space too big to relate to the human body. The audience itself starts to be able to engage at a scale and makes the myriads of activities that Beatrice the director is envisioning in this space to be possible.

Florian Idenburg: It's interesting when you get asked to do an installation like this, which is quite open-ended and quite free, to make sure you don't become the artist itself, meaning what we needed to provide is a space, a platform, a stage, a forum, in which other artists and thinkers can come together and actually do their work.

Jing Liu: In essence, I guess the baseline is doing the same thing and then allowing the MAAT to do the same thing as museum always did in the past, which is engendering and housing the cultural conversations in a new medium that is taking place at this moment.

Florian Idenburg: What we try to do with this installation is not to make it just a stage or just, say, a screen or just a room. So we're not so interested in creating an architecture that is very legible in its sort of functional sense. It's a very ambiguous form if you want; a form that can take on different meaning and different use. 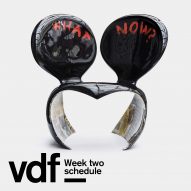 Jing Liu: Similarly, for example, in the Tricolonnade project, we took this is very simple idea of the colonnade and made it much more complex. In many of our projects, the idea of a canopy, this very simple architectural device, becomes a rich medium. So I think what Beeline does is similarly taking that idea of the void and turning it into an active agent that starts to be pregnant with all these possibilities.

Florian Idenburg: This intervention is all about how we bring people together. And so we hope that soon, in a few months, we will actually be able to come there and be in the space and be together with other people. The nice thing of this installation, [is that] it's one that is not finished at the day of opening. Actually, at the day of opening, it starts its life.

Jing Liu: Since March, streets all around the world are abandoned. People were told not to be in the streets. But somehow the form of the streets, even without the people, still is broadcasting a place where people should be together, even when they're empty.

So I'm imagining in my head that as the Beeline is constructed in this corona time, where there's no-one occupying it, but still the form that makes up the Beeline – the bridges, the ramps, the steps – they are already forms that talk about a lot of people should be on it and passing through it.