Curator Aric Chen and designer Thomas Thwaites discuss their work in the second part of our Virtual Design Festival collaboration with The World Around, which also features short films by Kalyanee Mam and Apichatpong Weerasthakul.

The second session starts with a conversation between Malika Leiper and filmmaker Mam, who will screen her short film Lost World. Set in Cambodia, it tells the story of land being sold and exported from under her feet.

This is followed by a conversation between Mariana Pestana, curator of the 2020 Istanbul Design Biennial, and Alessandra Covini and Giovanni Bellotti of Rotterdam-based Studio Ossidiana, who will discuss their work at the intersection of architecture, visual arts and design.

Shanghai curator Chen then gives us an insight into his State of Extremes at the Design Museum Holon in Holon, Israel, which had to close due to the coronavirus pandemic.

Chen also speaks to designer and writer Thwaites, who wrote a book about living on all fours with prosthetic limbs as a goat (pictured top), about the ages of extremes we are currently living through.

The session ends with a new short film by Thai filmmakerWeerasthakul, who also reflects with his friend Andrea Lissoni on his newfound relationship with his home 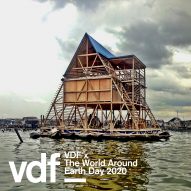 This is the second of three sessions that make up the symposium, which is structured around three themes titled Rethink, Reimagine and Recreate. The first session featured discussions with designers including Nelly Ben Hayoun and Nigerian architect Kunlé Adeyemi.

These talks will be followed by an interview with collaborative architecture practice Design Earth conducted by curator and writer Carson Chan.

We will be streaming the third talks session on a dedicated page as part of Virtual Design Festival from 8:00pm UK time.

An exclusive screening of a new short film called The Transscalar Architecture of COVID-19 by Andrés Jaque and Ivan Munuera wl close the symposium.

Here's the schedule for the day: