In this live interview, Beatrice Galilee speaks to Dezeen about the online symposium she has curated as part of Virtual Design Festival's partnership with The World Around for Earth Day.

From 2:00pm (UK time) today, Virtual Design Festival will host a series of online talks, interviews, short films and essays exploring ideas that could "shape the future of our relationship with the planet", according to Galilee.

In this live interview to introduce the symposium, Galilee speaks to Dezeen's editor-in-chief Marcus Fairs about the programme, which she curated in partnership with Facebook's Artist in Residence programme, and how curators and events organisers are adapting to the current lockdown across much of the world.

The programme, which Dezeen announced this morning, will explore "ways to ethically reconnect with our food, designing, building and living with human and non-human animals, radical new forms of pedagogy, biodegradable accessories, and the extreme new visual landscapes the coronavirus has generated," according to Galilee.

Galilee is a New York-based critic and curator. Co-founder of The Gopher Hole, a temporary exhibition space in London, she went on to be appointed co-curator of the 2009 Shenzhen Hong Kong Biennale of Architecture and the 2011 Gwangju Design Biennale, and chief curator of the 2013 Lisbon Architecture Triennale. 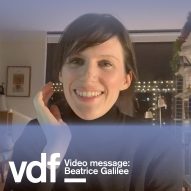 In 2014, she was appointed curator of architecture and design at New York's Metropolitan Museum of Art, where she initiated the annual In Our Time: A Year of Architecture in a Day symposium. Dezeen live streamed the events in 2016, 2017 and 2019.

After leaving the museum in 2019, Galilee teamed up with Diego Marroquin and Alexandra Hodkowski to establish a new architecture and design forum called The World Around. The first The World Around conference took place in New York in January earlier this year, which Dezeen also live streamed in full.

The second The World Around event was due to take place in New York City today, but had to be cancelled due to the coronavirus pandemic. Instead, Virtual Design Festival has teamed up with The World Around to present a digital version of the programme.

"I'm wondering what to say and what our role is"

In a video message published earlier today, Galilee said that she had been questioning what the role of the creative industries should be during the coronavirus pandemic.

"Like everybody working in the creative industries now, I'm wondering what to say and what our role is and what we can learn from these extremely complicated times that we're all sharing together," Galilee said in the video.

"Those are some of the questions I'm asking the best people I know in the design industries on 22 April here on Dezeen, when The World Around is going to take over the website for Earth Day."

Architect Kunlé Adeyemi and Facebook's Margaret Stewart to give talks

It is structured around three themes – Rethink, Reimagine and Recreate. Each part of the event will be broadcast in a separate post on a dedicated page as part of Virtual Design Festival.