Bossi's photographs feature the Meditation Space, a cylindrical concrete structure outside the UNESCO headquarters in Paris.

Completed in 1995, the building was commissioned to celebrate 50 years since the UNESCO constitution was brought into force, to offer peace and security to people from all nations.

Tadao Ando designed the Meditation Space in this spirit, as a place where anyone – no matter their race or religion – can pause for a moment of quiet reflection.

Bossi wanted to capture the solitary nature of the space. His photos show the structure bathed in a soft pink light, with other buildings around it, but no people to be found anywhere.

"The Meditation Space is an intense space of silence," he told Dezeen. "There is something unclear and magic; it is a space full of emptiness."

One thing the photographer hoped to convey in his shots was the change in mood, from being outside looking in, to entering the space. 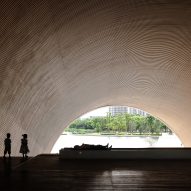 "You perceive a certain source of darkness when looking through, which turns into a bright ethereal one as soon as you are in," he explained.

"I wanted to investigate the rhythm of this transition," he continued. "The weight and the scale of its emptiness made me feel calm, protected, isolated, even overwhelmed somehow, but also extremely free at the same time."

The interior photos reveal the simplicity of the structure, which adds to its sense of monumentality. It is empty inside, apart from a pair of metal chairs that invite visitors to take a seat.

Once seated, there is little to distract. Only the dots on the walls, which are traces of the concrete casting process, and a shaft of light coming down through a gap between the walls and ceiling.

Tadao Ando was awarded the Pritzker Prize the same year that the Meditation Space was completed. His best-known projects include minimal concrete buildings like this one, such as the Church of the Light.

"I am fascinated by all those materials that reveal a certain sense of gravity and tactility," he explained.

Photographing the Meditation Space was more challenging than most – the space is difficult to reach, thanks to its position in the courtyard.

Bossi visited on an overcast day at the end of winter, which helped to create diffused lighting conditions throughout the shoot. This allowed the photographer the time he needed to find the best angles.

"Some shots were just a little step forward or a little angle variation from the previous ones, allowing myself to naturally flow deeper into this elusive atmosphere," he added.

Another circular concrete project by Tadao Ando is currently under construction in Paris – the transformation of a historic stock exchange into an art gallery.