Architectural photographer Simone Bossi spent a late winter's afternoon exploring the exhibitions spaces inside the Newport Street Gallery, with the company of just a few other visitors.

Bossi, who shot the images free-hand, focused on the diffused winter's light entering the high-ceilinged galleries from the angular skylights, capturing white-painted walls bathed in hues of blue.

"The winter light of the late afternoon was so gentle and I had noticed just a few people inside. I felt that the moment was favourable," the photographer told Dezeen.

"I was so fascinated by the light-blue temperature of the space caused by the sky," he continued.

The photographs also shows blue light flooding through a circular skylight lined with brickwork, as well as the spiral staircases wrapped with walls made from white engineered brick.

No artwork features in the collection, but instead visitors are captured gazing in different directions to add intrigue to the photoset. One shows a woman dressed in a red coat, and another a girl on her phone.

"I have always found it interesting seeing how other people react to the space without having a clear overview of that space," Bossi explained. "It always increases my sense of curiosity."

"As a photographer, I have always found it interesting to freeze these conditions as an image without finding a solution," he added.

London architecture studio Caruso St John was commissioned by British artist Damien Hirst to design the London gallery to house over 3,000 pieces from his personal collection. 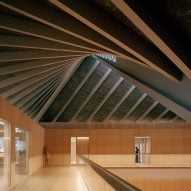