Architect Alison Brooks speaks to Dezeen in this live discussion with Marcus Fairs, as part of our Screentime interview series sponsored by Enscape. Watch the conversation live from 4pm UK time.

Alison Brooks is the principal and creative director of Alison Brooks Architects, which she founded in 1996. The studio works on both commercial and private projects.

Among the studio's latest projects is Windward House, an art-filled black house alongside a Georgian farmhouse in Gloucestershire that has been converted into a dedicated gallery space.

One of Brooks' best-known projects is The Smile, a "mega-tube" made of cross-laminated tulipwood timber that the architect designed for London Design Festival 2016.

Brooks is the recipient of the RIBA's Stirling Prize, the Manser Medal and the Stephen Lawrence Prize, the only British architect to have won all three awards. 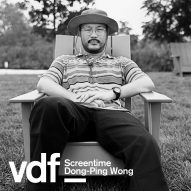 Virtual Design Festival is the world's first online design festival, taking place from 15 April to 30 June. For more information, or to be added to the mailing list, contact us at [email protected]