Designed to carry out both Covid-19 tests and antibody tests, M-Rad's concept for a portable testing unit features a body clad in copper alloy.

Chosen for its antipathogenic properties, the copper exterior would create a "virus-destroying environment", said the studio.

According to a study published in the The New England Journal of Medicine, Covid-19 can last for multiple days on certain materials such as plastic or steel.

Copper, however, is able to decay the virus within four hours.

The architecture studio proposes using six of the trailers to carry out approximately 3500 tests per day across 18 different areas in Los Angeles, California.

M-Rad also envisions the material's "glistening reflections" would position the trailer as "a traveling beacon of hope" for the public as it travels around the city. 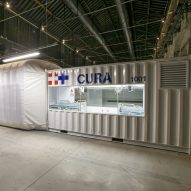 The design team, made up of Matthew Rosenberg, Ben Dudek and Etienne Serveau, worked to a self-set brief based on the World Health Organization's (WHO) four main Covid-19 strategic objectives.

These are to interrupt human-to-human transmission to prevent spread, to identify, isolate and care for patients early, to accelerate the development of diagnostics and vaccines, and to minimise the social and economic impact through multisectoral partnerships.

The studio took design cues from both existing portable medical units and from a series of virus testing facilities set up in a hospital in Seoul, South Korea, that look like public telephone booths.

Employing a similar system, M-Rad's unit would be used to take swabs from patients using arm-length rubber gloves through a perspex divider. This avoids any direct contact with the medical practitioner, and reduces the risk of cross-contamination between patients.

The swabs would then be sealed in an airtight container and placed into a sterilised containment unit at the bottom of the perspex divider.

According to the studio, to have one of the units produced, delivered and operating within 21 days would cost just under $40,000.

M-Rad hopes that, if produced, the mobile medical facility would help alleviate the pressure on hospitals and stationary testing locations across Los Angeles and other cities. 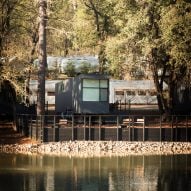 Alternatively the structure could be used to deliver food and essentials to the elderly or other at-risk individuals.

Once the mobile unit has been used for coronavirus purposes, M-Rad envisions it being repurposed to serve those who are homeless by being used as a form of shelter, as well as offering general medical and washing facilities.

The American firm recently built a series of mobile cabins at a glamping site in northern California, which feature design elements to accommodate people with disabilities.

Called X-Suite, the compact cabins measure at 270 square feet (25 square metres) and feature a wooden frame with exterior walls wrapped in a metal rainscreen, and a standing-seam metal roof.