San Fratello leads the Oakland-based architectural studio alongside co-founder Ronald Rael. Among the studio's projects is a group of 3D-printed earth structures intended to demonstrate the potential of using mud in architecture. 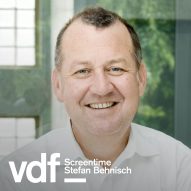 The studio attracted international recognition when it installed three pink seesaws in between the metal slats of the US-Mexico border wall, so that children on either side can play together.

The pair are also the co-founders of additive manufacturing startup Emerging Objects, which 3D-printed a pavilion using salt harvested from San Francisco Bay.