Architect Peter Cook explains Archigram's concept for a temporary city that can be set up overnight in the third instalment of our exclusive video series with the radical architecture group for VDF.

Developed in the late 1960s and early 1970s, Archigram's Instant City concept is a transportable kit of parts that can be quickly assembled to provide the inhabitants of small towns with access to the resources and cultural attractions of a large metropolis.

"Instant City was, in very raw terms, like a cultural circus," Cook said in the video, which Dezeen filmed in London and is sponsored by Enscape.

"It takes the cultural essence of a metropolitan city and takes them around like a circus, so that a small town or a village could become a kind of city for a week."

Instant City inspired by the architecture of outdoor pop concerts

According to Cook, the concept developed from Archigram's own experience of giving lectures with a packable set of presentation materials and props.

"Instant City was really based on our own Archigram experience, because we'd started giving lectures, packaging the Archigram ideas and going round with lots of projectors," he explained.

"There was an intermediary project called Ideas Circus, which was much more specific, which was actually a set of teaching devices put on trucks with the odd inflatable."

"It was that, allied to the period of open-air pop concerts – I think that was all in the air at the same time," he added.

Like Plug-In City, another of Archigram's metropolitan concepts, which Cook and fellow Archgram member Dennis Crompton discussed in the previous video in the series, there were a number of different versions of Instant City.

Initially, the concept comprised a packable kit of parts that could be transported by road, but later versions introduced lighter elements that could be delivered by air. 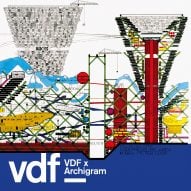 "We started to speculate, instead of a city trundling around on trucks, maybe it could all hang off an airship and it would just silently come in the night and you'd open the bedroom curtains and there was the city in the field behind you," said Cook.

"And then, a week later, it would have carried on. It's kind of analogous to the contemporary thought that everybody could be famous for five minutes, the Marshall McLuhan thing."

"There were various different versions of the Instant City – there was my version and there was Ron Herron's version," explained Cook.

"Funnily enough, we were both working on them in Los Angeles, but mine were still bedded in England and his was located in Los Angeles. There were only minor variants on an agreed set of parts."

The group also started to extend the Instant City concept as a series of parasitic elements that could enhance existing buildings and structures, which Cook said could have been explored more thoroughly.

"There are odd drawings, such as what happens if an Instant City off an airship drops into a town, so that you then have a series of parasite elements that are actually attached to the town itself," he said.

"You infiltrate WH Smith or the top of a bus. You don't just leave it in a field, nice and separate. I mean there is a whole territory there that one could have moved into, which is a mixture between an organised, contrived set of parts and a sort of agitprop effect on a town."

"I've never pursued that, but there's a whole territory there that I think can send messages to the current generation."

Founded in 1961, Archigram was an avant-garde collective of architects that became famous in the 1960s and 1970s for its radical architecture concepts.

As part of Virtual Design Festival, Dezeen is publishing a series of exclusive interviews with former Archigram members Cook and Crompton.

In the first instalment of the series, Cook explained the origins of the group and how it rose to prominence through a series of self-published magazines. In the second video, Cook and Crompton discussed its Plug-In City concept for an elevated city of capsule homes.