Architects are turning to virtual worlds for both working and socialising during the coronavirus pandemic, with everything from site visits to social events happening in cyberspace.

"Incredible things are happening," said Lara Lesmes of Space Popular, an architecture studio that has pioneered the use of virtual reality in its projects.

"We spend a lot of time in VR," said the London studio's Fredrik Hellberg. "I think we probably both met more new people during the lockdown than we normally would."

"Normally, it'd be really difficult to get people to find a time when everyone can meet up but a lot of people have time to do meet ups in VR."

In the last few days, Space Popular has launched a series of VR environments including the AA Earth Gallery, a virtual showcase created for the Architectural Association school, and SquAAre, a virtual gathering place for unit meetings and socialising.

They have also launched El Laberinto de Pikachu y Badtz-Maru, a simple labyrinth for children to explore, as well as a private world created as a gift for Lesmes' young niece who celebrated her birthday under lockdown in Spain.

All these environments have been created inMozilla Hubs, one of the simplest VR environments and one that can be visited without a VR headset.

More complex VR projects created by the duo include The Venn Room, an installation that explores how virtual reality could create hybrid living spaces where people's lives intersect through the technology.

Besides work projects, Lesmes and Hellberg spend a lot of time in "social VR" environments.

"It's basically like social media but you wear a headset and you have an avatar and you're in the world together with other actual real human beings," said Hellberg.

"It's like a multiplayer game but it's purely for socializing," said Lesmes. "There is no aim. There is no mission other than being together."

Last month, Mamou-Mani called on gaming designers to help him realise a VR version of an amphitheatre designed for this summer's now-cancelled Burning Man festival.

Mamou-Mani, who heads Mamou-Mani Architects, said he had received about 30 emails from game designers offering to help.

"They invited me to a virtual Burning Man online and then I went there and had a site meeting," Mamou-Mani said. "It was so surreal because I never really had a virtual site meeting. All the constraints, the physics of things falling down, you don't really have to think about that."

Mamou-Mani has been invited to several virtual festivals set up on different VR platforms. "I've experienced one virtual Burning Man inside something called AltspaceVR, which is a platform you can download," he said. "I'm experiencing other things in Second Life."

Space Popular spoke live to Dezeen last week as part of the Screentime series of live interviews set up as part of Virtual Design Festival, while Mamou-Mani took part in a live discussion with Dezeen Awards judges and winners.

Architect Sarah Izod, who was also part of the Dezeen Awards session, said her clients were now asking her to consider building virtual experiences to replace cancelled real-world events.

"That's something that I'm working on at the moment, said Izod. "There are so many brands who would have been launching new products that are looking for new opportunities in which to do that."

"In terms of Virtual Reality within the art world, we're seeing it already," she said, citing the virtual museum set up by collectors Sylvain and Dominique Levy, a new virtual gallery by Hauser & Wirth and Frieze art fair, which has launched a virtual fair. 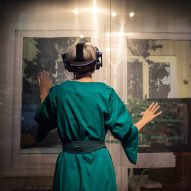 "One of the barriers when people are shopping online, whether it's for design pieces or artworks, is the sense of scale that's quite hard to get," said Phua Gajardo. "VR solves that problem."

Space Popular's Lesmes and Hellberg said that virtual reality had failed to live up to the early hype due to issues with uncomfortable headsets and slow internet connections.

"Technically it's an issue of hardware and software," said Lesmes, who said improvements to the experience were "just around the corner".

"5G is gonna open a lot of doors," she said. "At the same time, we now are seeing incredible improvements in real-time engines, so we don't have to wait for a render any more."

"The virtual is not going to replace anything physical"

"We're finding ourselves in that kind of fax machine moment," said Hellberg, referring to the way that facsimile technology was quickly replaced by superior digital tools.

However, Lesmes cautioned that VR was not about to solve issues created by the coronavirus pandemic.

"Everyone is rushing now to try to use the virtual as a bandaid for the problems that we have at the moment," she said. "It doesn't work like that. They complement each other but the virtual is not going to replace anything physical."