American architect Marc Thorpe has designed this Hollywood Hills residence for an art collector to draw on the modernist Case Study Houses.

Thorpe has released renderings of Case Study 2020, a house he designed to bring elements of modernist architecture into the 21st century.

He drew on principles explored in the experimental Case Study House project of the 1950s and 1960s. Sponsored by Arts & Architecture magazine, it was intended to provide a way to build American residences efficiently and inexpensively for the housing boom following the second world war.

Prominent modernist architects and designers, such as Richard Neutra, Eero Saarinen and Charles and Ray Eames, were commissioned to design houses. A number were built in Los Angeles like the Eames House, which is among the most well-known Case Study Houses.

Like its precedents, the 5000-square-foot (465-square-metre) Case Study 2020 is built with simple materials including concrete, steel, wood and glass.

It has a square concrete roof punctured with openings for trees to grow, or for skylights. Slender columns, a popular element of modernist architecture, support the roof, with glazing underneath slightly set back from the columns giving space to a series of outdoor walkways.

These paths divide the floor plan of the interiors into three volumes dedicated to living, sleeping and a gallery to showcase the client's art collection.

"Hosting the programmed volumes is the circulation or passageways unifying the spaces," Thorpe added. "The passages transition from exterior patio to interior hallway seamlessly, blurring the boundaries of the house."

Renderings show board-marked concrete walls with warm touches of wood and a minimal amount of furniture.

Outdoor areas extend beyond the space beneath the roof to two decks and an L-shaped swimming pool that wraps a corner of the house.

In addition to aesthetically referencing modernist houses, Thorpe also wanted to draw on the ideas of environmental responsibility and infrastructural independence – which he defines as being self-sustaining. 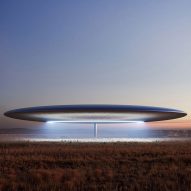 "The idea is that all buildings should be able to sustain themselves while also providing for others," he said. "It's a systemic approach to integrating ourselves and the things we make into the natural working order of the planet."

Thorpe imagines the house using a series of off-grid and sustainable systems, like solar power, water harvesting and composting to work "in perfect balance with its environment".

Construction on Case Study 2020 is slated to begin later this year. The architect, who founded his eponymous studio in New York City in 2010, has also built a black off-the-grid cabin in Upstate New York.

His other projects are a housing prototype for Senegal and a conceptual installation near Marfa, Texas and the border of Mexico that resembles a large spaceship landing on earth.