In this lecture, part of Virtual Design Festival's collaboration with CAMP, Snøhetta partner Jenny B Osuldsen discusses the architecture studio's core values and projects, including Times Square and the King Abdulaziz Centre for World Culture.

Norwegian architecture studio Snøhetta is named after a mountain in one of the hilly country's national parks, and every year, the entire studio attempts to climb it, gathering in its own-designed Wild Reindeer Centre Pavilion.

"We're really team-based, and it's important for us to work interdisciplinary," Osuldsen said.

"We're about 50-50 men and women and from maybe 30 different nationalities, coming together under this holy mountain: we really love to work to make architecture."

"Rather than being a skyscraper, the library is a landscraper, as it changes the city landscape," Osuldsen said of the Bibliotheca Alexandrina.

During the Arab Spring uprising, students from the nearby university linked arms to protect the library, something Osuldsen found very touching.

"We could see that we managed to push the world forward through architecture – it had its own life, a true ownership in Egypt, and had made a big difference."

In its designs, including its partial pedestrianisation of Times Square, Snøhetta aims to create or make innovative use of public space.

"Even the locals started coming back to Broadway," Osuldsen commented.

The studio works all over the world, but had to carefully consider accepting the building of the King Abdulaziz Centre for World Culture in Saudi Arabia.

"We had lots of discussions about if we can actually work in Saudi Arabia, as we have equal representation of men and women. Can the women go down to Saudi Arabia? What about all the gay people in the office?" 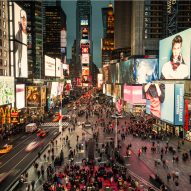 The most important part of the project? Men and women using the same entrance. "This is a huge difference in country like Saudi Arabia," Osuldsen pointed out.

The architect also spoke of smaller projects by the studio, including the treetop cabin in Lapland and Under, its underwater restaurant in Norway.

"Snøhetta is all about the people who work there and about really trying to push the world (forward) with architecture," Osuldsen concluded. "See if you can make a place that actually makes a difference."

Photography is by Urban Talks.