A trio of Danish architects has won a competition to design Denmark's first new-build architecture school, a sprawling campus on the outskirts of Aarhus.

Vargo Nielsen Palle is heading up a team of architects – Adept and Rolvung og Brøndsted Arkitekter – and engineers – Tri-Consult and Steensen Varming – on the design for the Aarhus School of Architecture.

Billed as the "first newly built architecture school in Denmark", the campus will feature a set of dedicated workshops, studios and outdoor spaces.

The 13,000-square-metre campus will form part of the Godsbanearealerne development in a former industrial area of the city and will allow the Aarhus School of Architecture to move out of its outdated premises in Nørreport, its "temporary" home for the last 50 years.

The team – which beat stiff competition from rivals including BIG, SANAA and Lacaton & Vassal – see the school as a "laboratory for architecture" and some of the buildings will be dedicated to inviting the public to get involved with the programme.

"When given the right tools and opportunity, people engage their surroundings. Godsbanearealerne already proves this by inviting the local community into an experimental campus," said Brian Vargo, Jonas Snedevind Nielsen, and Mathias Palle.

"The school should not just be an institution for architecture – it should continue this open laboratory, sharing its tools and programs with the public to create opportunities for the informal evolution of architecture."

Vargo Nielsen Palle is working with Adept on the architectural design and landscaping of the campus, while Rolvung og Brøndsted is responsible for project management and development.

The facilities they have designed will be split across a number of blocks, which decrease in scale towards the edge of the campus to match the scale of the former industrial environment.

Several small-scale buildings are also planned to house an artist's residence, workshops and an architectural centre for children. These will sit alongside Institute for X, a not-for-profit organisation already hosting studio and office spaces on the site.

"The building is organised as a city within a building: rich in diversity but within a simple and rough frame," said Martin Krogh of Adept.

"A variety of functions can be used by the entire city, and the larger open spaces throughout the building allow students and the public to interact in both planned and unplanned activities," he added.

The school is slated for completion in 2020. 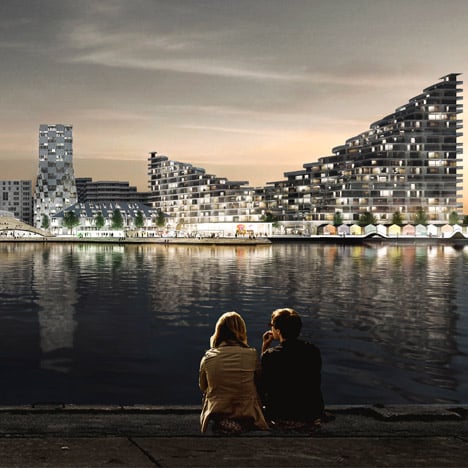 The city of Aarhus – Denmark's second largest – is currently undergoing significant redevelopment, with a domed extension in the works for the ARoS art museum and several projects taking roots around its harbour. These includse a waterside theatre, swimming baths and beach huts by BIG.

These facilities will join a group of new iceberg-shaped apartment and offices blocks.

For job opportunities at Aarhus School of Architecture, visit their company profile on Dezeen Jobs.