As Copenhagen celebrates becoming UNESCO-UIA World Capital of Architecture for 2023, we have compiled 15 young architecture studios based in the city doing especially interesting and innovative work.

Closely associated with household names like Bjarke Ingels, Henning Larsen and Arne Jacobsen, the Danish capital is well known for its architectural pedigree.

It has been named World Capital of Architecture for 2023 by UNESCO and will be hosting a series of events during the year accordingly, including the 28th International Union of Architects (UIA) World Congress of Architects in July. 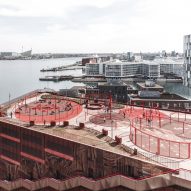 As well as several high-profile practices, there are also many up-and-coming studios causing ripples in this hub for architectural activity.

This selection of studios founded in the last decade has been put together with the help of Copenhagen Architecture Festival CEO Josephine Michau, Cobe project director Ulrich Pohl and the Danish Architecture Center.

Read on for 15 up-and-coming Copenhagen architecture studios you should know:

Founded by architect Nikoline Dyrup Carlsen and scenographic designer Svend Jacob Pedersen in 2014, Spacon & X is a multidisciplinary studio with a playful aesthetic that matches its name. In 2018, it was named Dezeen Awards emerging interior designer of the year.

Projects include POPL (pictured), a burger joint set up by famed Copenhagen restaurant Noma, and Filmlageret, a co-living space named building of the year by the City of Copenhagen in 2021.

Find out more about Spacon & X ›

Landscape architecture firm Sted – Danish for "place" – was founded in 2015 by Martin Hjerl and Rosa Lund and has quickly gained a reputation for creating thoughtful urban spaces. It was acquired by large Copenhagen firm Vilhelm Lauritzen Architects in February 2022 but retains its own brand identity.

Prominent Sted projects include Sorø's Green Stage, a city courtyard containing playful curiosities like a camera obscura and a periscope, and multi-levelled gardens for Steno Diabetes Center (pictured), which was designed by Vilhelm Lauritzen Architects in collaboration with Mikkelsen Architects.

Find out more about Sted ›

Renovation specialist Over Byen Arkitekter has grown to 85 people in a decade, and central Copenhagen is now dotted with its tender reuse projects.

Currently, it is restoring the listed Hotel Astoria (pictured), as well as working on a project to revitalise 20 small churches across Denmark in a sustainable way.

Find out more about Over Byen Arkitekter ›

The studio of Søren Thirup Pihlmann, former business partner of Lenschow, was founded in 2021 and now employs a team of 10.

Find out more about Pihlmann Architects ›

Through its mainly small-scale residential projects, Office Kim Lenschow is carving out a reputation for a raw construction aesthetic that proudly shows off building materials.

It was founded in 2020 by young Norway-born architect Kim Lenschow and now has a team of four. In addition to its architecture projects, the studio has produced design pieces like the Throne of Fragility (pictured), a biodegradable chair made of potato starch for Milan design week exhibition Alcova.

Founded only a year ago, two-person outfit Tideland Studio is an architecture and experience design practice with a penchant for employing cutting-edge technology and scientific research in its work.

Its first realised project, a public plaza in central Aarhus called New Ark, is set to complete in spring 2023. A collaboration with local architecture studio Rumgehør and artist Stine Rosdahl-Petersen, it features lifebuoy-like seating on top of wavy slabs in reference to rising sea levels.

Find out more about Tideland Studio ›

Founded by Olmo Ahlmann and Stine Christiansen, OS Arkitekter is a small practice that specialises in large-scale urban plans currently working on a masterplan for Molkenmarkt in Berlin.

It has also executed some small residential projects focused on using biomaterials such as House Built of Wood (pictured).

Find out more about OS Arkitekter ›

Established in 2021 by Magnus Maarbjerg and Marshall Blecher, MAST is a small studio that focuses on architecture on or around water – from small floating saunas to large buoyant housing developments.

Find out more about MAST ›

Spacegirls is composed of Cisse Bomholt and Elisabeth Gellein, a duo of architect-artists whose work centres around experimental materials and craft techniques.

Since 2016 they have been working with artists, researchers and manufacturers on installations like Kaffehytten (pictured), a woodland-floor-cast concrete cabin in a Danish forest.

Find out more about Spacegirls ›

Tulinius Lind specialises in historical transformations, like its new vestry for the white medieval Tilst Church near Aarhus (pictured).

The studio was founded in 2017 by Thomas Tulinius and Anders Lind and other projects by the small team include a timber school and activity centre in Våler, Norway.

Find out more about Tulinius Lind ›

The studio also undertakes research projects into biomaterials such as Harvest to House, which seeks to increase dialogue between farmers, agronomists, thatchers and architects. It is currently transforming an old school into a renovation-focused sustainability centre.

Find out more about Djernes & Bell ›

Founded in 2018 by Sebastian Aristotelis, Simon DH Kristensen and Karl-Johan Sørensen, SAGA Space Architects is quickly becoming a key player in its field.

It calls its aesthetic "terra tech" – highly technical but grounded in ideas of well-being taken from Earth's natural environment. Projects include Lunark, a moon habitat tested on a three-month mission in the Arctic (pictured) and its successor Rosie, the world's tallest 3D-printed polymer structure.

Over the past decade, Danish-German architect Jan Henrik Jansen has built up an extensive portfolio of unique houses through his eponymous studio.

Since being founded in 2014 by Søren Johansen and Sebastian Skovsted, Johansen Skovsted Arkitekter's small team has worked on office buildings, cultural sites, industrial renovations and even furniture for the Danish prime minister's official residence.

Its largest project to date is an office and warehouse in the coastal town of Køge called CODAN (pictured), recently completed and emblematic of the studio's muted, precise style.

Tegnestuen Lokal gained attention for its Ørsted Gardens project in Frederiksberg (pictured), named Dezeen Awards residential rebirth of the year in 2021. In line with its core philosophy of bridging the gap between old and new architecture, the studio replaced the austere and dilapidated concrete facade of a 1960s block with angular, plant-filled blocks.

Having been founded in 2015 by Christopher Carlsen and Morten Bang, Tegnestuen Lokal now employs a team of 16. Upcoming projects include Sommariva-byen, a new 212-home district in Helsingør.

Find out more about Tegnestuen Lokal ›