Designer Ilse Crawford spoke to Dezeen in a live interview as part of our collaboration with Braun for Virtual Design Festival.

The London-based designer spoke to Dezeen's founder and editor-in-chief Marcus Fairs about her work and what the future holds for the design industry.

Crawford is the founder of Studioilse, a multidisciplinary design studio working primarily in interior and product design.

The designer is embarking on a collaboration with influential German design brand Braun to create an online video masterclass in design.

The course will be structured around the key Braun design principles Less But Better, Built To Last and Design For Real Human Need, and aims to provide a framework by which participants can learn the fundamentals of design. 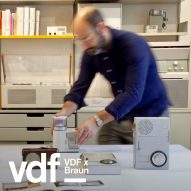 Live talk explores the past, present and future of German design brand Braun

The studio has previously produced several products for Swedish lighting brand Wästberg including a collection of non-electric oil lamps and a high-tech take on the classic library lamp.

Its previous projects also include a rug collection influenced by Sweden's landscapes for Kasthall and a collection of furniture made from cork and natural fibres for IKEA.

Crawford has also designed interior spaces such as a community soup kitchen in London opened by the renowned chef Massimo Bottura and the VitraHaus showroom in Germany using furniture by Vitra and Artek.

Before stepping down in 2019, Crawford was the head of the Man and Well-Being bachelors programme at Design Academy Eindhoven for over 20 years.

Crawford, who was named Maison&Object's designer of the year in 2016, was profiled in Netflix's documentary series Abstract: The Art of Design, alongside designers and architects like Bjarke Ingels and Es Devlin.

This livestream interview is part of Braun's takeover of VDF today, which also includes a live talk with designer Benjamin Wilson and curator Dr Peter Kapos about the history of the Braun brand, as well as a competition in which the brand's LE03 speaker and a BN0265 Chronograph gentleman's watch can be won at 5:00pm.

Braun is renowned for its functional approach to design, and counts designer Dieter Rams and his protege Dietrich Lubs amongst its heads of design. The brand's mission to create "honest, unobtrusive, practical devices" helped establish it as one of the most influential manufacturers of the 20th century.

Running from 15 April to 30 June, Virtual Design Festival is the world’s first online design festival. It brings the architecture and design world together to celebrate the culture and commerce of our industry, and explore how it can adapt and respond to extraordinary circumstances.