Four walls in the outline of a square conceal nooks for composting the materials that are used to fertilise the 27-hectare site of Casa Wabi arts centre, which the Japanese architect built on a beachfront property in Puerto Escondido.

The four-metre-tall structure follows the style of other additions on site, such as a cube-like installation called Atlantes, a towering chimney by Alberto Kalach and a kiln for ceramics created by Portuguese architect Álvaro Siza, by featuring concrete and red bricks.

Mexican artist Bosco Sodi, who founded Casa Wabi in 2014 and designed Atlantes, asked Gabinete de Arquitectura to create the volume, which is made from chunks of recycled bricks, concrete injected with metal fibres and diagonal cables.

Measuring 25 by 25 metres, the pavilion has walls that comprise metal structure that acts as a frame for square made from brick and concrete.

Gabinete de Arquitectura chose to use the old bricks to demonstrate that ruined materials are not useless and can be repurposed, which can be particularly impactful for impoverished communities that struggle with resources.

"We are surrounded by an amazing quantity of material," studio founder Solano Benítez told Dezeen, who explained that such materials are often overlooked.

Gabinete de Arquitectura also designed the pavilion to act as a reinterpretation of curtain walls, but instead of being glass and rigid, the partitions sway in the breeze. The walls cast moving shadows across the arid landscape, this giving the project its name, Descended from Another Sun. 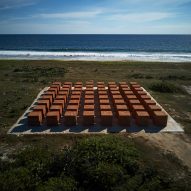 Two concrete volumes in the middle have nooks each for decomposing. The depositing areas have geometric constructions that mirror each other. Sandy soil, a pathway and plantings of cacti and bushes complete the project.

In addition to being an artist retreat and cultural centre, Casa Wabi specialises in offering activities for children of families in the area to teach about the environment and harnessing natural resources.

Japanese architect Kengo Kuma also recently created a chicken coop there that provides eggs to feed its visitors, artists and staff. The building is made of pine treated in the traditional Japanese technique for blackening known as yakisugi or shou sugi ban.

Based in Asunción, Paraguay and led by Solano Benítez and Gloria Cabral, Gabinete de Arquitectura has also created a brick pavilion for the Venice Biennale in 2016 that was awarded the best exhibition at the event.

Photography is by Claudio Sodi.