Originally designed for the inaugural 2019 Wulong Lanba Land Art Festival, the restaurant is described by its creators as part-architecture, installation and exhibition.

A footbridge with glazed balustrades leads from a winding mountain road to the venue.

To enter Floating Island Restaurant visitors pass through a glass-walled waiting lounge that looks back out across the road.

"The behaviour of people crossing the bridge is more like a process of approaching the landscape and the mountains, paving the way for the subsequent experience of entering the interior of the building," said C+ Architects

While this guest area sits on the ground at the top of the slope, the rest of the structure extends outwards, supported by two concrete columns and ending in a seven-metre cantilever.

C+ Architects designed Floating Island Restaurant as a blend of dining and a dramatic journey to the views.

"Chef Gilles Stassart specialises in blending food with social games to explore the relationship between people," explained the studio.

"Through several exchanges with Gilles, [we] clarified the design concept: using the architecture as a medium, with the help of the terrain, to guide the diners to experience the surrounding natural landscape while tasting the food."

Once inside, two passages along either side of a central kitchen block create moments of compression.

The passages open out to reveal the dramatic dining space, with a large 16-seat table at its centre.

"The sight of the diners, from the familiar scene of the park, through the transition of the middle passage, is finally settled in the pure valley landscape," added C + Architects. 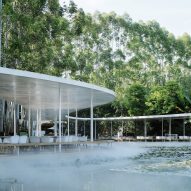 "The central space of the restaurant is composed of functions such as the operating table, storage room, bathroom and equipment room, which also plays a role of blocking and diverting sight lines."

The external cladding also works to execute this concept of a grand reveal.

A central portion of the restaurant covered with a white metal grille that offers glimpses outside, before giving way to a fully-glazed end section.

This grille also creates a play of views from the outside, revealing those inside when viewed straight-on while appearing opaque from an angle.

"The aluminium alloy material on the facade can reflect the change of the weather to a certain extent," said the studio.

"From sunrise to dusk, the exterior colour of the building changes with time, and even merges with the white mist."

White finishes and a wooden floor have been used to create a minimal interior, animated by the pattern of light and shadow created by the metal cladding.

While the building was designed for the festival, it will remain open for reservations.

C+ Architects was founded by Cheng Yanchun and Li Nan in 2014.

A similar concept of blending dining with an experience was recently used by Studio Duncalf in their designs for the Alchemist restaurant in Copenhagen, featuring atmospheric, planetarium-style scenes projected on the ceiling.