Toronto-based architect Josephson spoke to Dezeen's founder and editor-in-chief Marcus Fairs about the work of Partisans, the studio he co-founded alongside Pooya Baktash and Jonathan Friedman. 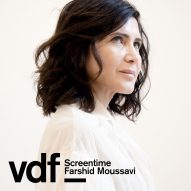 Amongst the studio's recent projects is The Orbit, a futuristic masterplan for the rural Canadian town of Innisfil that includes drone ports and infrastructure for autonomous vehicles.

Last year, Partisans collaborated with Google's urban planning wing Sidewalk Labs to create a prototype for a 'raincoat' that extends from a building's facade to protect the pavement in front of it in harsh weather.

The prototype was developed as part of Google's recently abandoned plan for Sidewalk Toronto, a smart city proposed for Toronto's waterfront.

Partisans also created The Grotto, a wooden lakeside sauna with a burnt-timber exterior and a cavernous cedar interior, located on the shore of Lake Huron, north Toronto.

The studio is also behind the mahogany interior of Toronto's Bar Raval, which references Barcelona's art nouveau pintxos bars.