Skira's Nime light projects a concentrated spotlight from a 10-millimetre-diameter opening, allowing items to be highlighted while the fitting is almost entirely hidden.

The beam angle, orientation and tilt intensity of each light can be adjusted to enable it to be directed at objects that are not positioned directly below it.

As the beam angle can be tilted by up to 30 degrees, the lights can be integrated into sloped ceilings and provide a downward facing light without protruding from the surface, unlike many other adjustable downlights.

"Nime lets you emphasise objects on vertical or horizontal surfaces, without the visual appearance of the fitting or its source," explained Skira. "You can light up small to large objects, even when they are not aligned with the luminaire."

"You can perfectly address the light where it is needed, even in sloped ceilings," he continued. "Or you can create equal circles of light from both low and higher ceilings. "

The Nime light fitting is designed to be painted to match a rooms ceiling colour so that it is "near-invisible". Only the 10-millimetre-diameter opening and the light beam can be seen.

This, combined with the flexibility of the beam's direction, means that it can be seamlessly integrated into schemes that require a uniform look and can be adjusted to focus on different areas as rooms are rearranged.

"As a lighting designer I wanted to have a luminaire that is practically invisible, so that visual attention is fully focused on the object I wanted to illuminate without the glare of the source of the object around the source," said Skira.

The spotlight's name is taken directly from this idea.

"What does it mean, Nime? In my region we have a very specific dialect and if you translate it directly it means 'I'm not here' or 'presence in its absence, absence in its presence'," the designer explained. 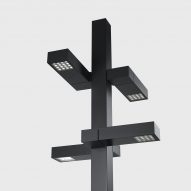 Delta Light is an international lighting brand, grown from a Belgian family manufacturing business. The company celebrated its 30th anniversary with a new "lighting bible" last year. It has previous collaborated with Skira to launch the Polesano street lamp, which can create "all necessary forms of light".

Find out more about Nime on Delta Light's website.

This article was written by Dezeen for Delta Light as part of a partnership. Find out more about Dezeen partnership content here.