The Swiss architect and designer spoke to Dezeen's founder and editor-in-chief Marcus Fairs about the concept he developed as part of his work for the Swiss furniture brand.

Called the Dancing Office, the concept consists of moveable partitions that allow office spaces to be reconfigured spontaneously and easily.

The concept was first implemented at the office of  Swiss consulting firm PwC and later at Hürlemann's own studio in Zurich.

At the core of the concept is the Dancing Wall, a multi-functional, mobile partition designed by Hürlemann for Vitra in 2018.

Designed to divide an office space into different zones and layouts, each partition features a metal frame that can be configured in a variety of ways to function as a bookshelf, TV unit, coat rack, plant wall, whiteboard and pin-board as well as a vertical desk.

According to Hürlemann, the concept of the Dancing Office was developed to encourage office workers to be active participants in their working environments.

"An important characteristic of Dancing Office is the fact that it motivates users to take initiative and to become actors in their working environment," Hürlemann explained of the concept.

The talk was part of Dezeen's collaboration with Vitra for Virtual Design Festival, which also featured a report on Vitra's research into the future of the office.

The collaboration will also see a series product launches from the brand on Monday 22 June as part of Virtual Design Festival's virtual products fair.

Vitra was founded in 1950 by Willi and Erika Fehlbaum after they discovered the designs of Charles and Ray Eames and subsequently produced many of the duos most iconic pieces.

The Swiss brand recently worked with Herman Miller to release a limited edition of the Eames' LTR table topped with eucalyptus wood from trees felled at the Eames house in Los Angeles.

It also recently worked with designer Virgil Abloh on an exhibition that imagined a vision of the home in 2035 by delving into the Vitra Design Museum's collection.

Hürlemann is a Zurich-based architect and designer specialising in furniture, product, interiors and exhibition design. 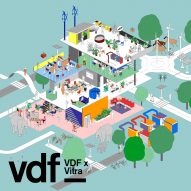 In 2018 he created window displays for Hermès and a series of huge wooden puppets exhibited at Ventura Centrale during Milan design week.